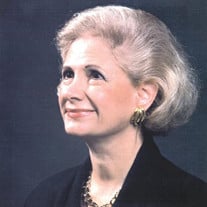 Rhoda Dubinsky, 91, was born in Kansas City, MO on August 6, 1927 and passed away February 7, 2019 in Dallas, TX. Funeral services will be held at 1:00 PM, Monday, February 11, 2019 at The Louis Memorial Chapel, 6830 Troost Ave., Kansas City, MO 64131. Interment will follow at Kehilath Israel Blue Ridge Cemetery, Independence, MO. In lieu of flowers, donations may be sent to Hadassah, Brandeis Women’s Coalition, The Temple, Congregation B'nai Jehudah, or a charity of one’s choice. Rhoda had many titles in her life, she was a beloved wife, mother, grandmother, great-grandmother and friend. She received her Bachelor of Arts degree from the University of Michigan in 1949 and continued her education with post graduate work at Indiana University. During this time Rhoda was an active member of the Sigma Delta Tau Sorority. After graduation, Rhoda excelled in her chosen field of advertising and served as Advertising Manager for The Kansas City Kansan newspaper from 1962 to 1977 and for The Jewish Chronicle from 1977 to 1985. Upon retirement, she enjoyed working in retail for Saks Fifth Avenue and Jacobson’s Department Store. Rhoda was an active member of The Temple, Congregation B’nai Jehudah and served on its sisterhood board until she moved to Texas to be closer to her children. She was also a lifetime member and award winning fundraiser for Brandeis University Coalition of Women and a lifetime member of Hadassah. Rhoda also was a member of the National Council of Jewish Women and served as Vice-President Docent for Johnson County Community College Museum of Contemporary Art. In her spare time, she was a patron of the arts, and enjoyed traveling and spending time with her many friends and family. Rhoda was preceded in death by her beloved husband, Maurice Dubinsky; parents: Fannie Ginsberg Katz and Phillip Katz, formerly of St. Joseph and Kansas City, MO and brother: Robert Katz, formerly of Berkeley, CA. She is survived by her daughter, Cheryl Sternberg and husband Tom Curley of Dallas TX; son: Michael Sternberg of Dallas, TX; step-daughter: Marci Klein and husband Mark of Overland Park, KS; step-son: Jeff Dubinsky and wife Debbie of Overland Park, KS; 5 grandchildren and 9 great-grandchildren.

The family of Rhoda Katz Sternberg Dubinsky created this Life Tributes page to make it easy to share your memories.