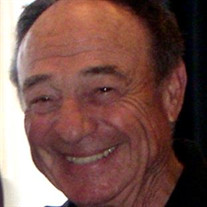 Richard Gerald “Dick” Greenberg, age 82, passed away peacefully Friday, October 9, 2015, surrounded by his family, after fighting lung disease for 16 years. Funeral services will be 1:30 pm Friday, October 16, at Congregation Beth Torah, 6100 W. 127th St., Overland Park, KS followed by burial at Rose Hill Cemetery. He grew up in St. Louis, MO, the only son of Harold and Bertha Greenberg. His four sisters served as his loving court and adored him. Dick graduated Clayton High School after a stint at Wentworth Military Academy. He attended the University of Missouri-Columbia as an undergraduate and stayed to earn a law degree. When he was 21, he met the love of his life: Margery Goldstein. They had a fairy tale love affair for the next 49 years and set an example for their children and grandchildren for what marriage and family could be at their very best. They moved to Kansas City, along with many of their St. Louis friends, who they considered family. As a young man, Dick was president of Pioneer Bag Company. An astute entrepreneur and businessman, Dick was instrumental in starting or working with companies including: Diversified Industries, Synthetic Industries, Imperial Carpet, Sof’Floor, Handy Andy, Shop and Go, and Tama Corporation. Dick’s experience in the carpet industry took he and Margie to Atlanta, where they lived, worked, and met friends for life. They moved back to Kansas City to be closer to their treasured granddaughters, Samantha and Jessica, who gave him the nickname that stuck for everyone that came to know him: Sir. Dick served on the boards of the Jewish Federation of Greater Kansas City and Oakwood Country Club. His service to others continued throughout his life. He collected many friends throughout the years, from the golf course to his regular breakfasts and lunches. Dick was an athlete who played semi-pro baseball and was an avid sports fan, particularly of any Mizzou team, the St. Louis Browns, the KC Royals and Chiefs. Later in life, Dick moved to Village Shalom. Though he never wanted to outlive Margie, he found renewed purpose in life through a class he created and taught for his fellow residents. S’Up, What’s Up, was named by his grandchildren and born out of his desire to help a fellow resident who was having trouble seeing and hearing. Dick who loved conversation and debate on current events, brought his iPad to dinner and read part of a news story. The desired conversation followed. Soon others came to sit at the table. Dinner conversation turned into a formal class where dozens of residents came together twice a week. The class earned Dick an award for excellence in aging from the State of Kansas. Though literally a lifeline to many of his peers, Dick would only say that he received more than he gave to others. Dick is survived by his son and sometime business partner, Steve Greenberg, daughter Lisa Greenberg Klein, and son-in-law Jim Klein. He was a loving grandfather to Samantha and Jessica Klein. He will be greatly missed by his sisters and brother in laws and their families: Cissy and Jerry Feldman, Barbara and Armin Sadoff, Iris and Dick Kite, Linda and Roger Howard. In lieu of flowers, the family requests contributions to either Village Shalom or KU Medical Center.

The family of RICHARD GERALD GREENBERG created this Life Tributes page to make it easy to share your memories.