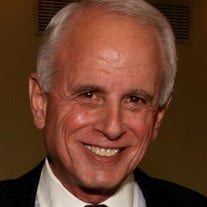 Richard Alan Novorr, 70, of Leawood, KS, passed away peacefully with family by his side on June 3rd, 2015 at Menorah Medical Center. Funeral services Sunday, June 7th, 1:00pm at The Louis Memorial Chapel, 6830 Troost Ave. Burial will follow at Rose Hill Cemetery, The family requests no flowers and suggest donations to the Harold B. Brown Scholarship Fund at the National Council of Jewish Women, or a charity of your choice. Rick leaves his wife and best friend of 50 years, Barbara Brown Novorr; three boys: Jeffrey Novorr and wife Barbara Gelb Novorr of Burke, VA, Scott Novorr and wife Jennifer Novorr, and Craig Novorr and wife Alyson Novorr, both of Overland Park. He also leaves behind his mother: Marjorie Novorr of Overland Park, KS; a brother and sister: Kenny Novorr and Patty Traub Novorr, both of Dallas, TX, and brother-in-law: Steven Brown of Scottsdale, AZ. Finally, he leaves Ben, Jon, Jack, Sophie, Tate, Lilah, Tyler, Nick, Ava and Ellaina, his 10 beloved grandchildren, all of which brought immense joy to he and Barbara. Rick was predeceased by his grandparents: Michael and Dora Novorr, Sam and Helen Optican, and his father: Howard I. Novorr. Rick was a native of Kansas City, MO, and spent his professional career of 37 years as co-owner of Michael’s Fine Clothing. Prior to joining the family clothing business, he attended The University of Kansas. Rick was an Eagle Scout, Warrior in the tribe of Mic-O-Say, past member of Oakwood Country Club, past Scoutmaster of Troop 61, past troop committee Chairman Troop 254, member of Ararat Shrine, past member of the Board of Menorah Medical Center, and he served as Staff Sgt. in the U.S. Army Reserve. Rick is an active member of The Temple, Congregation B’nai Jehudah, and Congregation Beth Torah. Ricks proudest accomplishment was his family. He started dating Barbara, his best friend and soulmate, when she was 15 and he just 18. Their 50 happy years of marriage were filled with health challenges, but that was always overshadowed by the joy his three boys and ten grandchildren brought to his life.

The family of RICHARD ALAN NOVORR created this Life Tributes page to make it easy to share your memories.