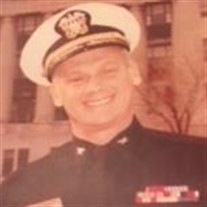 Captain Richard B. Rubenstein, U.S. Navy Retired, passed away on November 24th at his home in Kansas City, Missouri. He was 93 years old and he died of natural causes. Born November 2, 1924, he was a lifelong resident of Kansas City and the son of Frances and Leo Rubenstein. Richard Rubenstein attended Southwest High School and graduated in June of 1942. He briefly attended the University of Minnesota while awaiting an appointment to the United States Naval Academy. The appointment came from Missouri Congressman Roger Slaughter of the 5th district. Rubenstein entered the USNA as a midshipman in June of 1944 and graduated in June of 1948 with a degree in electrical engineering. Upon graduation Rubenstein was assigned duty aboard the U.S.S. New Hampshire, stationed in Newport, Rhode Island. On September 15, 1949 Richard Rubenstein married the former Jean Lewis, the daughter of Mr. and Mrs. George Lewis also of Kansas City. The wedding took place at the home of the bride’s parents on West 57th Street. In 1950 Rubenstein was transferred to the Atlantic Fleet on the aircraft carrier the U.S.S. Oriskaney stationed in the Atlantic out of Newport, Rhode Island where he served during the Korean War for two years. Rubenstein was released to the Naval Reserve in Kansas City in February of 1952 where he served until his retirement as Captain in 1984. In 1952 he assumed a position at the Lewis Investment Company in Kansas City. In 1965 he purchased the Blue Ridge Finance Company in Independence, Missouri and operated that firm until 1981. Richard Rubenstein was an enthusiastic participant in several local organizations. He was an active alumni of Southwest High School involved in newsletters, reunions, and other alumni events. And he was inducted into the Southwest Hall of Fame in 2013. Rubenstein served on the Liberty Memorial Committee to restore the monument. He was involved with Harvesters; the Community Food Network which addresses poverty through providing food to those in need. He also set up a small film library at the New Reform Temple, following the death of his wife in 2007. Richard’s sister Mrs. Audrey Manne of Miami passed away in April of 2015. He is survived by his four children, Jane Rubenstein, John Rubenstein and his wife Arlene Rubenstein, Jim Rubenstein all of Kansas City and Ann Rubenstein Tisch and her husband Andrew Tisch of New York City. Also surviving him are five grandchildren, Michelle Kosoglad, Adam and Stacy Rubenstein, Sarah and Charlotte Tisch, and two great grandchildren. Richard leaves behind a brother and sister–in–law, Mr. and Mrs. George Lewis Jr, cousins Jenard Gross of Houston, and Marge Lipsky of Kansas City, nieces Suzanne Block, Karen Morris, and nephew George Lewis III. A memorial service to celebrate his life will be held Monday, November 27, 2017 at 11am at the New Reform Temple at Gregory and Main Street. Contributions in Richard’s memory can be made to Harvesters, the Community Food Network (www.harvesters.org.) or The National World War I Museum and Memorial (www.theworldwar.org).

Captain Richard B. Rubenstein, U.S. Navy Retired, passed away on November 24th at his home in Kansas City, Missouri. He was 93 years old and he died of natural causes. Born November 2, 1924, he was a lifelong resident of Kansas City and the... View Obituary & Service Information

The family of RICHARD B. RUBENSTEIN created this Life Tributes page to make it easy to share your memories.