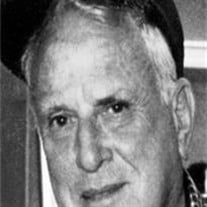 Richard Bud Fritzshall died peacefully at home on September 24, 2012. Bud spent his childhood in Chicago and on December 22, 1941 - his 21st birthday - he enlisted in the Air Force. As a pilot, he flew over 70 missions in the Pacific theatre. After the war, a friend set him up with a blind date. Dot Schwartz was so late in arriving that the meeting almost didn’t happen, but arrive she finally did, and by the end of the evening, Bud announced to her that she didn’t have to agree yet, but she was going to marry him. Bud and Dot married in 1947 and she remained the center of his life for 63 years until her sudden death in 2010. Together they and their children Randy, Sherry and Jill enjoyed the travels of a military family. Bud was recalled to active duty, serving in the Korean conflict and then in the Strategic Air Command until he and Dot decided to set down roots. The family moved to Kansas City and Bud went into business with his brother Sherwood, owning Midas Muffler shops in the metro area. To their many friends, Bud and Dot were the consummate hosts, and they remember many, many card games, pool parties and barbeques at the Fritzshall household. At the same time, it was clear every day, and to every person, that Bud’s first priority was his family. It was for Dot and the children that he toiled, and nothing gave him greater pleasure than their company. Bud is survived by his son and daughter- in-law Randy and Linda Fritzshall, daughter Sherry Fritzshall, and daughter and son-in-law Jill and Jim Maidhof; and grandchildren Chase Fritzshall, Callie Maidhof, and Bridey Maidhof Stangler and her husband McKay Stangler. Nieces, nephews and cousins also survive.

Richard Bud Fritzshall died peacefully at home on September 24, 2012. Bud spent his childhood in Chicago and on December 22, 1941 - his 21st birthday - he enlisted in the Air Force. As a pilot, he flew over 70 missions in the Pacific theatre.... View Obituary & Service Information

The family of Richard Bud Fritzshall created this Life Tributes page to make it easy to share your memories.