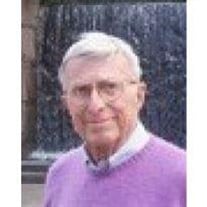 After hosting his annual Christmas Day reception and enjoying eggs benedict on New Year’s Day with his children and grandchildren, Richard M. Levin passed away on January 8, 2014 after a brief illness. Richard was the founder and CEO of Jason/Empire Inc., an optical importing company. He served as CEO and Chairman of the Board for over 30 years. A lifelong resident and Kansas City-booster, he was born April 16, 1925 to Marion Berger Levin and Jake Levin. An attendee of Southwest High School, he started college in 1941 at the age of 16 at the University of Pennsylvania. The U.S. Army called and Richard joined the infantry and served two and half years. He was wounded at the initial battle of Leyte, Philippines in 1944, receiving the Combat Infantryman Award and the Purple Heart. He returned to college in 1945. Richard spent two years working in Chicago after graduating from the Wharton School in 1947. In 1949, Richard and his father co-founded the predecessor to Jason/Empire. The main products the company sold were binoculars, telescopes, microscopes and weather instruments; later the company specialized in tennis products. Richard married Carol Ann Hoffman, the daughter of Gladys and Lewis Hoffman in 1951. They had three children. They enjoyed travel, especially foreign travel, which included many trips to France and Germany. Over a 40-year period, the couple built a collection of representational American painting of the first half of the 20th century, frequently enjoying gallery visits to New York. Business travel often took Richard to Japan, Hong Kong, Taiwan and Korea. After taking the company public in 1969, Richard arranged the sale to the Carlson Company of Minneapolis with the company ultimately ending up as part of Bushnell Optics. Richard retired in 1980 and afterwards spent many winters in Phoenix, Arizona where he and Carol enjoyed a home. Carol passed away in 2000. Active in civic affairs, Richard served the Nelson-Atkins Museum as a member of its Board of Trustees, as a member of the Steering Committee of the Business Council and on the Investment Committee. He spent many years on the Board of The Kansas City Art Institute as Treasurer and Vice Chairman. He was a member of the Board of the Jewish Federation for over 45 years, most of them as vice president. He was the first recipient of its Young Leadership Award. During that time, the organization helped aid many Holocaust victims and Russian refuges resettle in the United States. He was also a member of the Board of the Hebrew Immigrant Aid Society of New York, which specialized in this work. He spent many years on the Board of the Jewish Community Foundation, was Vice President and a Life Member of the Board. Richard was President of the Board of the Jewish Vocational Service as well as long-term board member. Pursuing his efforts as a Kansas-City booster, Richard was an active member of the Kansas City Civic Council. He served on the Heart of America Boy Scout Board, chairing a number of its functions. For over 20 years, he was on the Board of Menorah Medical Center, retiring from the Board as its Vice Chairman. Richard was a founding member of The New Reform Temple, serving it twice as its President. He was a Life Member of the Board and Chairman of its Endowment Committee. For many years, he was involved with the Kemper Museum, the Truman Library and Heart of American Shakespeare Festival. Richard was a 65-year member of Oakwood Country Club. Richard leaves his three children: daughter Nancy Levin (Jeff Flora), son Michael Levin (Diane) and daughter Ann Brendle (John). He also leaves seven beloved grandchildren: Molly Powers (Ryan), Zac Flora (Lori), Jamie, Andy and Joe Levin; Jason and Amanda Brendle and five great-grandchildren. He is also survived by his sister Gerry Uhlfelder, of Scarsdale, NY and his faithful cat, Charlie, of the condo. Funeral services will be held at the New Reform Temple, 7100 Main, Kansas City, MO, on Sunday, January 12, 2014 at 2:00pm with burial to follow in Rose Hill Cemetery. In lieu of flowers, the family suggests contributions to Wayside Waifs or the University of Kansas Medical Center, payable to KU Endowment.

After hosting his annual Christmas Day reception and enjoying eggs benedict on New Year’s Day with his children and grandchildren, Richard M. Levin passed away on January 8, 2014 after a brief illness. Richard was the founder and CEO of Jason/Empire... View Obituary & Service Information

The family of Richard M. Levin created this Life Tributes page to make it easy to share your memories.

After hosting his annual Christmas Day reception and enjoying...