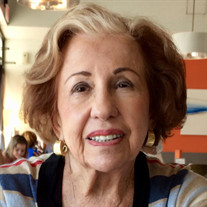 Rita Ann Kahn, 90, died peacefully on December 14th, 2019 at Menorah Medical Center from complications of congestive heart failure. Beloved mother, wife, sister, daughter, and grandmother, she was born on September 29th, 1929, in Kansas City. The daughter of a butcher from Poland, William Horwitz, and Mary Rovick, a homemaker from Atchison, Kansas. The older of 2 siblings, she was the protector of her ‘baby brother’, Bob Horwitz, whom she defended to the death, and with whom she enjoyed a close and loving relationship all through her life. In school, Rita Ann devoured all the classic books, and excelled in singing; she sang in a trio for years and never lost her love of music from the Great American Songbook. She wanted to go to college but somehow no one noticed that she was actually a great candidate for higher education, so she worked for a coffin-making company and for Lays Potato Chips instead. After fending off numerous beaus because of her movie star looks and flirty personality, she was swept off her feet in 1951, when she met and married Gilbert Joseph Kahn, to whom she was married for 63 years until his death at age 90 in 2014 . In 1973, after raising two children, Stuart and Sarilee, Rita Ann went to work for Gilbert’s business, the Morton-Kahn Construction Company, which eventually became the 12th largest company of its kind at the time in Kansas City. When Gilbert retired in 1985, Rita found work in desktop publishing at Baptist Memorial Hospital, where she stayed for the next decade. She adored traveling and voyaged to China, Israel, Egypt, Uzbekistan, Kyrgyzstan, and France, in addition to numerous adventurous cruises and yearly sojourns to New York City to see all the current Broadway shows. Throughout the years, she was a bowler, played tennis and golf, and loved to work out and do aerobics and spin classes. More recently, she had taken up bridge, and continued to play mah jong and cards. She also adored movies, especially the old ones, which she savored on Netflix. Rita particularly loved to love, and had many friends, young and old, who adored her in return. She had a special place in her heart for her children and grandchildren, Nicole, 13, and Ariel, 16. And she was an honorary grandma to the kids and grandkids of her niece, Sherri Hermanson. After Gilbert died, Rita took up happy residence at Village Shalom, where she formed many wonderful friendships. Rita Kahn is survived by her son Stuart and granddaughters, Ariel and Nicole; her daughter, Sarilee and her husband David Singer; and her brother, Bob Horwitz. The family is grateful to Village Shalom, Menorah Medical Center, and the community of family and friends who gave Rita such joy in life. For all of us, a light has gone out in the stratosphere. May she rest in peace. The funeral will be held at Louis Memorial Chapel beginning at 3 pm on Tuesday, December 17th, 2019. Interment will be at Rose Hill Cemetery. In lieu of flowers, the family requests that donations be made to the Jewish Community Center’s White Theatre. Please contact Donor Relations Manager, Felice Azorsky (913) 981-8895.

The family of Rita Ann Kahn created this Life Tributes page to make it easy to share your memories.