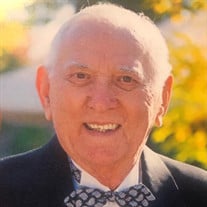 Robert Mitchell Gershon, 94 of Overland Park, Kansas passed away peacefully Wednesday, November 25, 2020 at Kansas City Hospice. A private funeral service was held graveside Friday, Nov 27th at Rosehill Cemetery. In lieu of flowers, please send donations to The Temple Congregation B’nai Jehudah, Kansas City Hospice, Wayside Waifs or a charity of one’s choice. Bob was born on March 24th, 1926; the youngest son of Joseph and Ada Gershon. He grew up working in and around the family tailor shop and dry-cleaning business and after the work was done, you could find him being a ball boy and playing tennis at the Plaza tennis courts. He also played basketball at the JCC and at Westport High School where he lettered in basketball and tennis. After High School, he went off to serve his country in WWII where he reached the rank of Sergeant and served as a Flight Engineer on B-29s. He was decorated with the Asiatic Pacific Theatre Ribbon, American Theatre Ribbon, Good Conduct Medal, Army of Occupation Medal Japan, and Victory Medal. When Bob returned to Kansas City, he went into the family dry-cleaning business, Arrow Cleaners & Dyers, with his father and brother Melvin. Bob was a born salesman and went about growing the business through relationships and with some of KC’s great department stores like Harzfeld’s, Woolf Brothers, Swanson’s, etc. In 1949, Bob married the love of his life, Jacqueline Shefrin, and they had a 67 year long love affair until her death in July of 2016. Bob was a real renaissance man. He worked hard and he played hard. He was a great handy man, could fix about anything, and an even better athlete. A single digit handicap golfer and a championship tennis player, winning the Missouri Valley doubles. He and Jackie loved the social scene and when they hit the dance floor, it was pure poetry. He along with Jackie were involved with many charitable organizations including the Shakespeare Festival, Kansas City Jazz Orchestra, and Quality Hill Playhouse. Bob never met a stranger and he could work a room like a maestro! He was preceded in death by his wife Jackie, daughter Frances, his parents Ada and Joseph Gershon, his brothers Edward and Melvin, and sister Diane Spiegel. He leaves his daughter Susan Gershon Shatz (Hal Samuels); son Bruce Alan Gershon and Stephanie Siess Gershon; grandchildren Jesica Harrelson and Patrick Harrelson, Orange, TX; Joseph Bradley Gershon and Alli Brown Gershon, Denver, CO.; Lauren Gershon Andre and Eliot David Andre, Broomfield, CO; great-grandchildren, Tommy, Marion, Elle, and Liv Gershon also of Denver, CO.

The family of Robert "Bob" M. Gershon created this Life Tributes page to make it easy to share your memories.