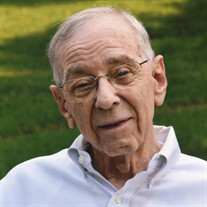 Robert H. “Bob” Navran of Overland Park passed away peacefully Wednesday, October 20, 2021 at the age of 98. For those that would like to attend, graveside services will be held Friday, October 22 at 10:00 AM at Rose Hill Cemetery, 6900 Troost Avenue in Kansas City. If you would prefer to join by zoom please email [email protected] for the Zoom link and passcode. Born February 27, 1923 in Kansas City, Bob was the last surviving sibling of the six children born to Harry and Jane (Jennie) Segelbohm Navran. He attended William Cullen Bryant elementary school and graduated from Southwest High School in 1940. He belonged to Lambda Tau Epsilon social fraternity during high school. He took a one-year course in accounting at Universal Business Institute in Kansas City before enrolling at Kemper Military School, Booneville, Missouri in 1941. He earned an Associate of Arts Degree with honors from Kemper in 1943. Kemper emphasized character, self-discipline and responsibility, traits that Bob embodied throughout his adult life. A member of the World War II greatest generation, Bob enlisted in the U.S. Army in May 1943. He completed basic training at Camp Roberts, California and was assigned to the 9th Armored Infantry Battalion of the 6th Armored Division of the Third Army in Europe. He landed at Utah Beach in September 1944 and served in the invasion into Germany. Following several weeks of combat during winter weather conditions, he was evacuated from near Vatimont, France due to exposure related injuries. He recovered in a hospital in England and was reassigned to duty in France before his honorable discharge as a Staff Sergeant in April 1946. After the war, Bob joined Midwest Envelope Company, a family business founded by his father in 1916. He served in several positions at Midwest before being elected President in 1962. His business career also included positions as President of Westrite Ltd., a family-owned lithography printing and stationary business, and Executive Vice President of Service Envelope Co. He owned Checkrite Ltd. of Kansas City from 1982-1989 and was a major accounts printing sales representative for AlphaGraphics in Overland Park from 1992-2003 before retiring from a 57-year business career at the age of 80. Bob met his “Precious” wife, Elinor (Ellie) Sircus in 1953 and they were married in February 1954 after a short courtship. They enjoyed a loving and long marriage of 59 years until Ellie’s passing in 2013. A lifelong member of Congregation B’nai Jehudah, Bob was confirmed at The Temple in 1938 and was married there. Bob enjoyed dining out, playing gin rummy, riding mopeds, and traveling with family and friends. His interests also included wildlife, history, the Kansas City Royals, cars and meteorology. Bob was a kind, gentle and unselfish man who cherished his family above all else. He had a wonderful sense of humor and a contagious laugh. He was a resilient optimist who had a strong will to live and never complained about life’s challenges. Bob is survived by three children and their spouses: Jennie and Dan Stolper; Hedy and David Brizendine; and Andy and Tricia Navran, all of the area. He also leaves grandchildren and spouses Alli and Mike Hearne, Jeff and Lisa Stolper, Mitchell Navran and Avery Navran and great-grandchildren Sam Hearne, Bo Stolper, Hannah Hearne and Nash Stolper. His sister-in-law Manon Mallin and many nieces and nephews also survive him. In addition to his wife Ellie, he was preceded in death by siblings Ralph Navran, Richard Navran, Jeane Navran Oppenheim, Marian Navran Grossman, and Roger Navran. The family wishes to thank Bob’s caregivers Phyllis, Bridget, Kim, Marquita and Yolanda; the caring staff at Tallgrass Creek-Blue Sage Point; and Ascend Hospice. In lieu of flowers, the family requests memorials to The Temple, Congregation B’nai Jehudah or a charity of your choice.

The family of Robert H. "Bob" Navran created this Life Tributes page to make it easy to share your memories.