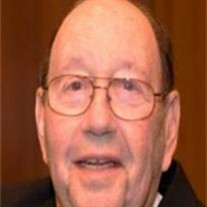 Robert Wayne passed away October 6, 2012 at Village Shalom. Services will be held at Louis Memorial Chapel, 6830 Troost, KCMO, at 10:30am Wednesday, October 10. Burial at Mt. Carmel Cemetery. In lieu of flowers, please send contributions to Congregation Beth Shalom or Village Shalom. Bob was born September 7, 1925, to Frank and Rose Wayne. He graduated from Paseo High School. He was active in Boy Scout Troop 61 and became an Eagle Scout and Fire Builder in the Tribe of Mic-O-Say. He attended the University of Missouri for one year before enlisting in the US Army Air Corps, where he became a flight officer and bombardier/navigator trained to fly B29 aircraft. Bob was honorably discharged in 1945 and he returned to the University of Missouri, graduating with a BS in Business. He then joined the family business, Wayne Towel & Linen Supply, where he worked until his retirement in 1986. Bob was an active member of Congregation Beth Shalom, Meadowbrook Country Club, and ROMEOS. He volunteered for Jewish Family Services. At age 29 Bob met the woman with whom he wanted to spend his life, and he wed Jeanette Miller on October 24, 1954. They enjoyed 57 wonderful years together. Bob is survived by three children and their spouses, Susan and Scott Krigel, Melody and David Wayne, and Karen and Jerry Green. He is also survived by grandchildren Lara Pabst and her husband Ben, Ari Krigel and his wife Beth, Steven Krigel, Ashley Green and her fiancé Michael Italia, Courtney Green, and Heather Wayne. Great-grandchildren are Norah Pabst, Harry Pabst, and Rhys Pabst. Bob was pre-deceased by his parents Frank and Rose Wayne, son Stephen Wayne, and brother, Howard Wayne. Bob’s family would like to thank his team of doctors, who greatly extended the length and quality of his life: Drs. Jonathan Jacobs, Mark Davidner, David Bock, Loren Berenbom, Bill Ginsberg, and Zandy Davis. The staffs of the Kansas City Cancer Center and the Leawood Dialysis Center treated Bob with care. And a special thank you to the staff at Village Shalom, who understood Bob and treated him with dignity and humor, and who guided him and his family through many challenges.

The family of Robert Wayne created this Life Tributes page to make it easy to share your memories.