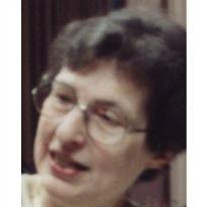 Roberta Phyllis Gorelick, of Overland Park, passed away at Hospice House of Kansas City on Septermber 26, 2013. She was born in St. Joseph Missouri on March 22, 1938, the second daughter of Clara and Abraham Jacob Bogdanoff. The family moved to New Orleans for several years where her father worked for Wohl Shoe Company, but returned to Kansas City after the start of World War II which she called home the rest of her life. After graduating Paseo High School, Roberta attended the University of Nebraska for one year. In 1958, she married Jack Gorelick, with whom she spent almost 55 years together until death separated them. She was the much-loved and proud mother of Paul, Andrea (Moldo) and Elliott and took great joy in her grandchildren, Samuel, Naomi, Joseph, and Noah. Her indomitable spirit shined through throughout her life, but especially when she insisted on traveling (despite health problems and against doctor’s advice) to the Bar Mitzvah’s of her grandchildren, Samuel, and later Joseph. She also made every effort to go to New Jersey to be at the ordination of her son-in-law, Rabbi Larry Moldo, from Academy for Jewish Religion. With no less pride did she make sure that she was several years earlier at the graduation from nursing school of her daughter-in-law, Laura Lake. Family was important to her and she was the “go to” person for her family for news of relationships, births, bnei mtizvot, and weddings. She was the practical anchor of the family providing constant assistance with finding lost papers and helping meet deadlines especially when she returned to work after raising her children as the co-manager/owner of Sam’s Loan Office with Jack. Besides family, she enjoyed chairing the Simcha Committee at the Congregation Beth Shalom for many years and delighted in being a Cub Scout leader both as a Den Mother and as a Cub Scout Roundtable Commissioner. She also enjoyed the many friends made at her weekly mahjong game. Besides her children and grandchildren, she is survived by her husband Jack and her beloved sister, Shirlee Ernstein of Overland Park. A service was held Sunday, September 29, in the Yukon Chapel followed by burial at Mt. Carmel Cemetery. Please make contributions to the charity of your choice. You may also share online condolences at www.louismemorialchapel.com.

Roberta Phyllis Gorelick, of Overland Park, passed away at Hospice House of Kansas City on Septermber 26, 2013. She was born in St. Joseph Missouri on March 22, 1938, the second daughter of Clara and Abraham Jacob Bogdanoff. The family moved... View Obituary & Service Information

The family of Roberta Gorelick created this Life Tributes page to make it easy to share your memories.

Roberta Phyllis Gorelick, of Overland Park, passed away at Hospice...