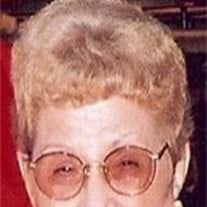 Rose Taraboulos, 88, of Overland Park, KS, passed away Sunday, June 28, 2009 at The Forum. Graveside services will be 10:30am Tuesday, June 30, at Kehilath Israel Blue Ridge Cemetery. Kindly omit flowers, the family suggests contributions to the Good Samaritan Project, 3030 Walnut, Kansas City, MO 64108 (gsp-kc.org) Mrs. Taraboulos was a production manager at Ecadil Pharmaceuticals, Cairo, Egypt in the 1940’s, where she met her husband, Henry, who was a chemist and they were married in 1949. Upon their marriage she helped Henry start a specialty manufacturing company which produced boxes and glassware for the pharmaceutical and perfume industries of Europe and Northern Africa. Mrs. Taraboulos and Henry immigrated to the Kansas City area in 1959 to be near her sister, Fortune Bennett and her family. She was a tailor for Jack Henry’s Clothing Store from 1962 to 1978 when she started Tailor’s II in Overland Park, retiring in 1986. She was a member of Kehilath Israel Synagogue and its Sisterhood, the Rabbi’s Talamud Study and the Garment Workers Union. Mrs. Taraboulos was preceded in death by her son, Solomon Taraboulos, in 1995; her husband Henry, in 2000; her brothers: Raphael Mosseri and Aslan Mosseri and a sister, Henriette Asher. She is survived by her son: Michael Taraboulos and his life partner, Jack E. Foster, Leawood, KS; sister: Fortune Bennett, Ulster, N.Y.; also surviving are many loving nieces, nephews and their families.

The family of Rose Taraboulos created this Life Tributes page to make it easy to share your memories.