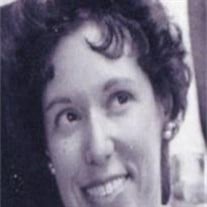 Roselle Burstein Poisner, 79, of Overland Park, Kansas passed away peacefully at home on Sunday, May 12, 2013. Funeral services will be at 1:00pm Tuesday, May 14, at The Louis Memorial Chapel, 6830 Troost Avenue, Kansas City, MO with burial to follow in Rose Hill Cemetery. Rather than flowers, the family requests you make contributions to the Dr. Alan and Roselle Poisner Lectureship in Pharmacology at KU Endowment, KU Medical Center, 3901 Rainbow, Kansas City, KS 66160. Roselle was born May 25, 1933 in Brooklyn, NY to Phillip and Ida Burstein. She is survived by her husband, Alan, of the home, son David and wife Linda of Carmichael, CA (grandchildren Hannah, Sarah and Adam) and son Jonathan Poisner and wife Suzan of Vancouver, WA. Also surviving are her sister-in-law Rhoda Burstein of Albuquerque, NM, brother-in-law Larry Poisner and wife Rita of Kansas City, and many cousins, nephews, and nieces. She was predeceased by her brother, Donald Burstein, and her parents. She will be missed by all for her generous heart, thirst for knowledge and organization, and desire to help others flourish. After she was diagnosed with an incurable brain tumor in January, Roselle penned the following auto-obituary - "One of the most difficult things to do is write your own obituary, especially when you are feeling reasonably well. I feel very lucky to have grown up in Brooklyn, surrounded by family, friends, and everything New York had to offer. After receiving both Bachelors and Masters Degrees in Chemistry from Brooklyn College, I worked for a future Nobel Prize winner at downstate Medical Center, where I was able to contribute to several important papers. My work also allowed me to attend a Pharmacology meeting in Rochester, New York in 1961, where I attracted the attention of a cute Doctor attending the same meeting. After a courtship back in New York City, Alan and I got married and spent the first year of our marriage in London, England, just the first of many times when we were able to travel the world together. Then we moved back to New York, where I was able to work alongside Alan doing research at Albert Einstein College of Medicine. During this time, we had two wonderful boys, David and Jonathan, while living in the Bronx and New Rochelle. In 1968, we moved to Kansas City (Alan's hometown), where I was welcomed with love by Alan's family. I was able to continue working with Alan in our laboratory in the Pharmacology Department at KU Medical Center and, most importantly, we remained best friends. It was a good and rewarding time. We managed to raise our wonderful boys, David and Jonathan, who made us very proud and still do. I got to travel to dozens of states and countries, meet interesting people, and establish lasting friendships in Kansas City and elsewhere. I became a life member of the local chapter of the Brandeis National Committee and was happy to be the recording secretary for 10 years. I also was in the KU Medical Center Auxiliary Book Club for 25 years, including serving as its coordinator for many years. I was a life member of the National Council of Jewish Women and a longtime member of The Temple, Congregation B'nai Jehudah and its Sisterhood. As a member of the Jewish Community Center, I was able to do water aerobics for almost 25 years. I will miss my friends and especially my wonderful husband Alan, who has always been besides me and is still my very best friend. I will miss seeing my grandchildren grow into adults. I'm proud of their ongoing desire to learn and strong Jewish identity. I hope till the end I can retain a sense of humor, even though sometimes I don't understand Alan's puns. I am truly grateful for my family and friends and hope I have made all their lives better."

Roselle Burstein Poisner, 79, of Overland Park, Kansas passed away peacefully at home on Sunday, May 12, 2013. Funeral services will be at 1:00pm Tuesday, May 14, at The Louis Memorial Chapel, 6830 Troost Avenue, Kansas City, MO with burial... View Obituary & Service Information

The family of Roselle Burstein Poisner created this Life Tributes page to make it easy to share your memories.