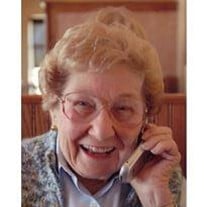 Rowena Rich Milens, 98, passed away October 5, 2013 at Claridge Court, Prairie Village, KS. Funeral services will be at 11:00am Monday, October 7 at The Louis Memorial Chapel, 6830 Troost Ave., K. C. MO, 64131. Burial follows at Rose Hill Cemetery. Born January 31, 1915, to Morris and Fanny Brown Rich, she grew up in Kansas City and graduated from Southwest High School. Unable to attend college due to the death of her father, she went to secretarial school and became a secretary for the Rich and Rich law firm. She married the love of her life, Cyril Milens, on December 27, 1938. They were partners in all they did for 67 beautiful years. Rowena raised their children; worked at the family’s department store, M.G. Milens & Sons, with Cyril; and volunteered in the community. She gave her time to the Denver Home for Asthmatic Children; NCJW Junior Council; Jewish Federation of Greater Kansas City; and Menorah Medical Center Auxiliary, where she was on the board for over 40 years. She volunteered in various areas at Menorah, but her greatest interests were serving as Co-chair of the Coffee Shop and later as Chairperson of See’s Candy. Rowena was a life member of NCJW, Brandeis National Women’s Committee, Menorah Auxiliary, Congregation B’nai Jehudah and its Sisterhood, and Village Shalom. She belonged to many of the city’s civic and cultural organizations. She was preceded in death by her parents, her beloved Cyril, brothers and sisters: Meyer and Lillian Rich, Isadore and Ethel Rich, Louis Rich, Gertrude and Sam Lazorow, Lillian Rich; and Leslie and Rosalie Milens. She is survived by her children: Michael and Sharon Milens, Barbara and Richard Atlas; grandchildren: Andi Milens, New York City, Vicki and Andrew Widman, Lauren and Jeremy Resnick, Jacksonville, FL, Jonathan and Heidi Atlas, Chicago, IL; great grandchildren: Reece and Will Widman, Charlie and Sam Resnick, Max and Sadie Atlas; and many nieces and nephews. Rowena’s life revolved around her family and friends, to whom she was extremely devoted and for whom she served as a role model on how to live a wonderful life. She had a great sense of humor and was always fun to be around. She demonstrated how to age gracefully, and at 98 she still kept up with current affairs and the stock market, and enjoyed watching the Royals, the Chiefs, and Duke basketball. She loved life and had a great attitude. Her philosophy was that “the cup was half full, never half empty.” Rowena’s love, kindness, wisdom, smile, and laughter will be missed by all who knew her. The family would like to thank Rowena’s wonderful caregivers, Niesha, Cici, Shelly, Tiera, Veronica, Continua Hospice, and all of the terrific staff at Claridge Court. The family requests no flowers and suggests donations to the Cyril and Rowena Milens Endowment Fund at The Temple, Congregation B’nai Jehudah, Jewish Federation of Greater Kansas City, Jewish Family Service, or a charity of one’s choice.

The family of Rowena Rich Milens created this Life Tributes page to make it easy to share your memories.