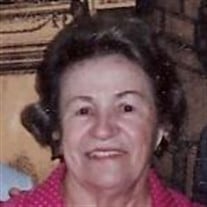 Rozia “Rose” Szneler, devoted and generous wife, mother, grandmother, and friend was born in Sosnowiez Poland in 1921. She had a wonderful childhood, and was loved by her very large extended family in Sosnowiez and neighboring Bendin. She was known to be the best worker in her family’s sewing shop, where they made unique heavy fabric items, particularly religious ornamental items such as Torah covers and ark curtains. Her entire family, including her Parents, grandparents, her siblings, aunts, uncles, and many relatives perished in the Holocaust, leaving her alone as the only survivor. She was known to have a remarkable memory of events and people from her childhood through her adult years. Rose’s family heard from her acquaintances from the war, which she discovered after the liberation, of her years of bravery and unselfish service to others during the terrible years of ghetto, work camp, and concentration camp. Rose had the number 76450 (then 79095) tattooed on her arm in Blechamine, and was moved to various labor camps including. After her liberation from Bergen-Belsen concentration camp in 1945, she lived in what became the DP camp of Bergen-Belsen, and there met Jacob Szneler, also liberated, who had lost his entire family, including wife, son, parents and family (including 12 siblings and their families). Rose and Jacob were married in Bergen-Belsen in 1946, and lived there and later Bremen, Germany until receiving papers to come to the United States, and directly to Des Moines, in November 1950. Rose and Jacob had three children: Esther, Lola, and Marvin. Rose had extraordinary compassion for the “orphan, widow, and the ill” and did all she could to bring happiness to others, whether by her friendship, her cooking and baking, her driving people who needed a ride, and just being an empathetic friend. Rose and Jacob worked hard to provide for their three children, and later grandchildren, moving to Windsor Heights in 1959 to be in walking distance of a good school. Rose worked for many years at Kneeter Furs as a seamstress. She was a devoted member of her synagogue, spending considerable time over the decades in its kitchen. Rose’s war suffering did not diminish her love of Judaism, with every holiday observed, and a welcoming holiday table. She was a spectacular cook and baker, self taught. Often she made a Bar or Bat Mitzvah cake in the shape of Torah scrolls, with jewels and rods. She enjoyed being with friends, often the last to leave an event. She chose life and chose to enjoy life. Rose’s dementia was a cruel disease, robbing her of what she loved to do – talk to others. She could speak five languages when the disease struck. Even in a care facility, Rose never “gave up” her will to live, to maintain her dignity (only wearing dresses), and in the first few years, to express her concern for those more ill than she. Rose remembered everyone she met, whether from her days in Europe, scores of friends through the years, and the acquaintances whom she met. Rose always had a wonderful relationship and great respect for her many physicians over the years, which treated Rose with great respect, even making house calls, and for whom she loved to present with her delicious baking. To give special appreciation to those who touched Rose; physicians, nurses, friends, neighbors who would bring her groceries in the winter in her later years and everyone who treated her with kindness and respect, would be impossible. She was always grateful, and if she could today, she would thank them with a batch of her shpritz cookies, a honey cake, jelly roll, or babka, or her always delicious homemade gefilte fish. Rose had many, many wonderful friends over the years, and close to many who were like sisters and brothers. Regrettably, most have passed away before Rose. In her final years, she was the beneficiary of the great care of many who worked to improve and maintain the quality of her life. A very special acknowledgement to Renana Abrams and her family, who were extraordinary and respectful friends to Rose before and after her move to Overland Park; and to Erin Kling, RN, and her Kansas City Hospice team, who treated Rose with enormous compassion and skill for over two years, for which Rose was very grateful. Rose passed away at the Kansas City Hospice House on November 5, 2014. Graveside service was Thursday, November 6, 2014 at Jewish Glendale in Des Moines. Memorial contributions suggested to: United States Holocaust Memorial Museum, 100 Raoul Wallenberg Place, SW, Washington, DC 20024, or American Jewish Committee, (www.ajc.org) 165 East 56th St., NY, NY 10022.‎ Rozia “Rose” Szneler was indeed, a “woman of valor” (more precious than rubies) as described in the Jewish text. Her memory is a blessing to those who knew her.

Rozia &#8220;Rose&#8221; Szneler, devoted and generous wife, mother, grandmother, and friend was born in Sosnowiez Poland in 1921. She had a wonderful childhood, and was loved by her very large extended family in Sosnowiez and neighboring Bendin.... View Obituary & Service Information

The family of Rozia "Rose" Szneler created this Life Tributes page to make it easy to share your memories.