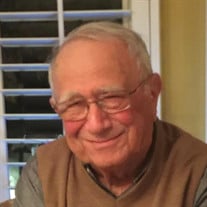 Rudy Green, 91, passed away peacefully at home surrounded by his family on Thursday May 14, 2020. Private family services were held at Rose Hill Cemetery. In lieu of flowers, memorial contributions may be made in Rudy’s name to a charity of one’s choice. Born January 15, 1929 to Millie and Herman Green in Idstein, Taunus Germany, Rudy came to America in 1937 with his parents at the age of 8, settling in Kansas City, MO. He was an only child who grew up closely with cousins who his parents helped bring to this country. Rudy considered these cousins to be the siblings he never had. He graduated from Paseo High School, class of 1947 remaining close to many from his class through reunions and personal relationships over the years. After attending junior college, Rudy worked as a leather tanner, mastering a trade that would later become his livelihood. He proudly served in the US Army, 2nd Infantry Division, 9th Regiment in Korea. Upon returning from his service, he joined his father at the Herman Green Co., a manufacturer of leather goods for the shoe industry and which his son, Jeff, would later join as a third-generation business. He was an active member of The Temple, Congregation B’nai Jehudah and its brotherhood, the Korean War Veterans and served on the boards of Huntington Farms and Leawood Town Village. Rudy married the love of his life, Phyllis Zurovsky on December 11, 1960 after a short courtship. Phyllis and Rudy spent almost 60-years together sharing their work, travel and raising their family in the life that they built together. They were blessed with two wonderful children, Jeff and Sheryl, a daughter-in-law (Susan) and son-in-law (Andrew) whom he considered his own children, and 6 grandchildren. Family was everything to him and all he did in life was for his family. Rudy was preceded in death by his parents, Millie and Herman Green. He leaves his wife, Phyllis - of the home, his son and daughter-in-law, Jeff and Susan (Schaefer) Green - Prairie Village, KS, his daughter and son-in-law, Sheryl (Green) and Andrew Kaplan, Overland Park, KS and 6 grandchildren, Gordon, Spencer, and Marshall Green and Alex, Emily, and Matthew Kaplan. He also leaves many in his extended family, who he has remained close with through distance and time. “Rudy loved America and considered himself the luckiest man ever!”

Rudy Green, 91, passed away peacefully at home surrounded by his family on Thursday May 14, 2020. Private family services were held at Rose Hill Cemetery. In lieu of flowers, memorial contributions may be made in Rudy&#8217;s name to a charity... View Obituary & Service Information

The family of Rudolf "Rudy" J. Green created this Life Tributes page to make it easy to share your memories.

Rudy Green, 91, passed away peacefully at home surrounded by...