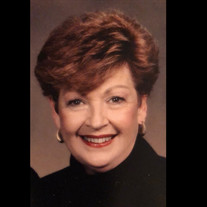 Ruth Arlene Berger 88, of Prairie Village, KS, passed away peacefully on July 1, 2019 surrounded by the love of her family. Ruth was born in Kansas City, MO on July 30, 1930 to Hyman and Bertha Fishman. She was raised in Kansas City, MO and moved to Prairie Village, KS after her marriage to Robert Morris in 1950. She and Bob raised three children together in Prairie Village prior to his death in 1965. Ruth married Zane Berger in 1968 and remained his loving wife and best friend until his death in 2013. Ruth went to work for the Kansas City Jewish Chronicle in the late 1960’s and served the newspaper loyally as their advertising manager until her retirement after over forty years. Ruth was very active in the Kansas City Jewish community, Beth Shalom and Beth Torah synagogues, and was an early and longtime member of Meadowbrook Country Club. Ruth’s proudest accomplishment, however, was her family. Ruth gave every bit of herself to the family she loved and those lessons will always be a gift. She was preceded in death by her parents Hyman and Bertha, husbands Robert Morris and Zane Berger, daughters Alana Morris and Carla Dozier, brother Jerry Fishman and is survived by her son Jeffrey Morris and daughter in law Ann Morris of Austin, TX; granddaughter Robyn Fulks and grandson in law Bradley Fulks of Kansas CIty, MO; grandson Brooks Dozier of Chicago, IL; granddaughters Madeline Morris and Lily Morris of Austin, TX; and her beloved great granddaughter Claire Fulks. Funeral services will be held Friday, July 5 at 10:30 a.m. at The Louis Memorial Chapel, with burial immediately following at Mount Carmel Cemetery. The family will then receive condolences at a reception following the graveside service at 2:00 p.m. at Leawood Town Village, 4400 W. 115th Street, Leawood, KS. In lieu of flowers, the family suggests contributions to Planned Parenthood or the Kansas City Hospice & Palliative Care in Ruth’s memory.

Ruth Arlene Berger 88, of Prairie Village, KS, passed away peacefully on July 1, 2019 surrounded by the love of her family. Ruth was born in Kansas City, MO on July 30, 1930 to Hyman and Bertha Fishman. She was raised in Kansas City, MO and... View Obituary & Service Information

The family of Ruth Arlene Berger created this Life Tributes page to make it easy to share your memories.