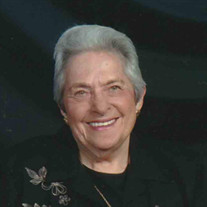 Ruth Andron Spielman, 96, passed away Monday, August 20, 2018 in Edmond, OK. Memorial services will be at 10:00am Sunday, August 26, 2018 at The Louis Memorial Chapel, 6830 Troost Avenue, Kansas City, MO. with inurnment to follow at Rose Hill Cemetery. In lieu of flowers, the family suggests contributions to The Alzheimer’s Association. Ruth was born November 27, 1921 in Mineola, Long Island, New York. She graduated from Oceanside High School on Long Island in 1939 and later from Pratt Institute, Brooklyn, in 1942 with a B.S. degree and awards. She took graduate courses at N.Y.U. and Columbia University, New York. As a B.S. graduate of Pratt University, she became first a Bacteriologist for Sheffield Milk company; a Nutritionist for the State of New York in the New York State Emergency Food Commission under Cornell University working out of Brooklyn and the Head Nutritionist at the Huntington, Long Island Office. Later she became an Adult Nutrition Ed Teacher. In Kansas City she changed her career to the Music Management Field. The Kansas City chapter of Young Audiences recruited her as Executive Director. Under her direction, concerts in schools by seven professional ensembles grew from 187 to 624 performances per year. Then the Youth Symphony of Kansas City sought her out for leadership as a manager for 8 years where the students, parents and board became endeared to her. In her early years as a parent, she was active in PTA and was the head Cub Scout leader. When she was a student, she enjoyed playing basketball, field hockey and baseball. She played violin in the school orchestra. On March 11, 1942, she married Corporal Michael Spielman and traveled with him upon his discharge from the Army Air Force as he joined orchestras in succeeding years: Dallas, Buffalo, Indianapolis and Kansas City. In 1957, they moved to Prairie Village. On her retirement, she became active on the Executive Board of the Youth Symphony, board of the League of Women Voters and held a variety of positions with Hadassah and then President of the Herzl Group. She has been a member of the City of Hope, Scholarship Chairman for the Jewish War Veteran Auxiliary and recording secretary. She continued her membership and support in the Women’s Division of the Jewish Federation, Friends of Art, the Symphony Women’s Association, K.I. Sisterhood, Youth Symphony, K.C. Symphony, Women International, and Brandeis University National Women’s committee, National Organization for Women, Jewish Women International, Interfaith alliance, JCRB/AJC, and K.C. Chapter of MU Phi Epsilon. She was honored by the establishment of an annual award given to a youth symphony member for their accomplishment with the organization ---“Ruth Spielman Award”. She was an honoree at the Herzl Hadassah Annual Testimonial brunch. She had worked on the election Boards since her arrival in Kansas City (1957) and for many years her position had been a supervising judge with her most recent appointment in 2005. Her most recent Board positions have been as advisor on the Executive Board at The Temple, Congregation B’nai Jehudah as well as historian. She held position as historian for district board of Women of Reform Judaism at the same time holding that position with the greater Kansas City Chapter of Hadassah. This long time member of The Temple, Congregation B’nai Jehudah enjoyed her leadership and membership in the Havurah Group, Temple Adults Unlimited and The Temple committee, “Mix and Mingel”. Other honors, awards and recognitions: 1977: Recipient of the Kanas City Musical Club award for dedication to the promotion of young audiences. 1993: Honoree at Hadassah Medical Organization fund raiser: 1993: Jack Henry Pyramid of Arts award for Outstanding Volunteer service. Received The Temple, Congregation B’nai Jehudah Sisterhood awards: “Shashonah Rose” and the “Flame”. She is preceded in death by her parents, Anna and Phillip Andron, who arrived in America from the ghettos of Poland, at the age of 19 and by her husband, Michael Spielman, her sister and brother in law, Dr. Arnold and Shirley Wallace and niece, Dr. Fran (Wallace) Epstein. She is survived by her sons and daughter in laws Jeff (Pam) Spielman of Colorado, Dr. Stephen (Jodie) Spielman of Oklahoma, grandchildren, Dr. Carrie (Alan) Hromas, David Spielman and nephew Dr. Lee (Marsha) Wallace

The family of RUTH ANDRON SPIELMAN created this Life Tributes page to make it easy to share your memories.