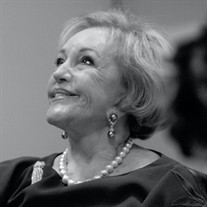 Ruth Abend Krigel Tivol passed away on March 10, 2021. A Zoom memorial service will be held on Sunday, March 21st at 11AM CST please email [email protected] for more information. The family requests no flowers. Donations may be sent to the Ruth Krigel Tivol Fund at the Jewish Community Foundation, 5801 W. 115th St., Overland Park, Kansas 66211, or the charity of your choice. Ruthie was born July 10, 1929, in Dubienka, Poland. In December 1938, Ruthie, along with her older sister and mother, reunited with her father in Kansas City. Her father was brought to the United States by his older brother several years earlier and he had worked tirelessly to raise money for their passage to freedom. Ruthie always understood how fortunate her family was to escape the brutality of World War II. She never forgot those who were left behind. Ruthie graduated from Central High School in 1946. She attended the University of Missouri for one year and then went to work for George K. Baum. Shortly thereafter, she met attorney Herbert Mayer Krigel and they were married in 1950. They immediately relocated to California, where Herb re-enlisted in the Navy to serve in the Korean War. They returned to Kansas City shortly before the birth of their first child. Together, they raised their three children surrounded by extended family in a home filled with joy and laughter. Ruthie and Herb loved hosting gatherings. The house was filled with music and art. Ruthie’s favorite recipes were shared in the “Come Into My Kitchen” section of the Kansas City Star. Widowed at the age of 45 in 1974, Ruthie went to work for J.C. Nichols, where she set records in sales. Her success was, in large measure, due to both hard work and her sincere care for her clients. In 1978, Ruthie married Harold Tivol. She joined him at work at Tivol, where her style and charm enhanced the business. She was among the first to recognize the talent of new designers and young entrepreneurs who would all go forward with the greatest success. She and Harold were a charismatic team. They became well known and beloved in the national and international jewelry network. Ruthie was president of the PTA at Border Star School. She served as president of the Women’s Auxiliary at Menorah Medical Center. For many years, she was a docent at the Nelson-Atkins Museum of Art. She chaired numerous fundraisers for organizations throughout the community, including the Barstow School, the Anne Frank Exhibit at Union Station, the U.S. Holocaust Museum, and the Hyman Brand Hebrew Academy. She and Harold were also honored by Jewish Family Services. Throughout her adult life, Ruthie volunteered for the Jewish Federation of Greater Kansas City. She belonged to the New Reform Temple, The Temple, Congregation B’nai Jehudah, Oakwood Country Club, and Tamarisk Country Club. She enjoyed golf, tennis, and, especially, bridge. She was part of a study group comprised of remarkable women who gathered regularly for more than 50 years. Ruthie was preceded in death by first husband, Herbert Mayer Krigel; second husband, Harold Tivol; and granddaughter, Brooke Tivol McGrath. She is survived by her children, Merilyn Berenbom (Loren), Kathy Hawley (Scott), James Krigel (Felicia), Tom Tivol (Susan), Cathy Maslan (Mark); grandchildren, Anne Wishna (Victor), Michael Berenbom (Mollie), Katherine Berger (James), Jennifer Stone, Jonathan Stone (Jessica), Annah Bundschuh (Kevin), Mayer Krigel, Kamden Krigel, Jacob Tivol, Derek McGrath (Allison), Hunter McGrath (Gloria), Danielle Maslan and Andrew Maslan (Jacqueline); great-grandchildren, Vivien, Abraham, Eliana, Adam, Mae, Max, James, Ethan, Lydia, Cora, Isla, Brooke, Elle and Willa; brother, Mel Abend; and many loving nieces and nephews. The family extends our deepest gratitude to Ruthie’s compassionate and kind caregivers: LaCrisia Mozingo, Duncan Njorage, Meron Samuel, Liya Wereti, Aiysha Hussen. Ruthie’s circle of friends was wide. Her generosity of spirit lifts us all. Her ability to always seek the good with an open heart is our legacy.

Ruth Abend Krigel Tivol passed away on March 10, 2021. A Zoom memorial service will be held on Sunday, March 21st at 11AM CST please email [email protected] for more information. The family requests no flowers. Donations may be sent to... View Obituary & Service Information

The family of Ruth Krigel Tivol created this Life Tributes page to make it easy to share your memories.