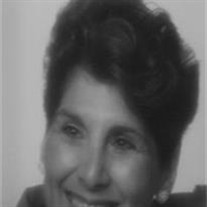 Ruth Gruenebaum passed away December 7, 2011 at her home surrounded by her loving family. Funeral services will be at 2:30pm Sunday, December 11 at The Louis Memorial Chapel, 6830 Troost Avenue. Burial will follow at Rose Hill Cemetery. Ruth was born in Benisch, Czechoslovakia (Sudetenland) in 1928 to Irma and Kurt Oppenheim, of blessed memory. She lived with her family in this small town for 12 years where her father owned and operated a renowned liqueur factory that had been founded by his grandfather. Ruth, her sister Ilse, and parents arrived in the United States in 1940 after making a treacherous escape through Holland and waters infested with mines. Ruth graduated from the University of Cincinnati, College of Applied Arts in 1950. She was also a student of the Cincinnati Art Academy. Ruth spent several years designing and painting backgrounds for displays at the Federated Department Store in downtown Cincinnati. In 1957 the Cincinnati Enquirer praised her water color “Snow Bound” and in l961 her water color “Café” which were selected for display in two Art Festivals. Ruth developed incredible talent in various media including, pastels, enamels, and silk. In addition Ruth wrote many poems; some won awards and were published in local papers. Ruth married her husband Herbert in Cincinnati in 1949 and together they raised three children. Kansas City became their home in 1963. As a stay at home Mom Ruth devoted her life to her family and continued her passion for painting and had a booth in the original Plaza Art Fair. Ruth also volunteered her talent to the Jewish Community Center where she was a member of the Board. She was an active member of Beth Shalom Sisterhood and a life member of Hadassah and the Jewish War Veterans Auxiliary. In 1976 her husband Herbert was transferred to USDA headquarters in Washington DC. They lived in Wheaton, Maryland. There, she became a member of the Montgomery County Art League and the International Society of Poets and was thanked for her support and participation. Shortly after Herbert’s retirement in 1993, she and Herbert returned to Kansas City to be near their children and grandchildren. Ruth became a member of Temple B’nai Jehudah Sisterhood and Brandeis. She continued painting and several were chosen for local art festivals. When her eyesight declined, she changed her style and eventually turned to working with clay at the Heritage Center and Alpha Point. Together they enjoyed 62 years of marriage raising plants and gardening. Ruth is survived by her beloved husband Herbert, her children Dr. Michael Gruenebaum and wife Kristine, Dr. Steven Gruenebaum, and wife Louise, and Nancy and husband Jeffrey Lang. She is adored by her six grandchildren, Benjamin Gruenebaum and wife Morgan, Andrew Gruenebaum and wife Lacey, Lauren Gruenebaum, Danielle Gruenebaum, Adam Lang, and Brandon Lang. She is also survived by her sister Ilse Smith of Endina, Minnesota, cousins Edith (Beck) Schreiber of Cincinnati, Ohio, Peter Beck of Bruntal, CSSR, and Dr. Felix Beck of Leicester, England and their families. Ruth’s cheerful smile and caring spirit will be missed by all that knew her. Her valiant and brave fight with blindness and cancer are an inspiration. The family suggests in lieu of flowers donations in her memory may be made to The Temple, Congregation B’nai Jehudah, the American Cancer Society, Mother’s Against Drunk Driving or the charity of their choice.

Ruth Gruenebaum passed away December 7, 2011 at her home surrounded by her loving family. Funeral services will be at 2:30pm Sunday, December 11 at The Louis Memorial Chapel, 6830 Troost Avenue. Burial will follow at Rose Hill Cemetery. Ruth... View Obituary & Service Information

The family of Ruth Eva Gruenebaum created this Life Tributes page to make it easy to share your memories.

Ruth Gruenebaum passed away December 7, 2011 at her home surrounded...