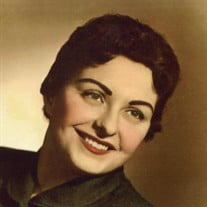 S. Marian M. Shear, 87, of Overland Park, KS, passed away February 3, 2018 at Kansas City Hospice House after a long illness. Marian was born January 20, 1931, to Louis and Lillian Margolin in Kansas City, MO. She graduated from Central High School. She attended the University of Illinois where she earned her bachelor’s degree in Journalism in 1951 and Master’s degree in Market Research in 1952. Marian was an original “Mad Woman”. She started her own advertising agency, Litman-Stevens-Margolin, with a partner in the early 1950’s when she was 20 years old, at a time when women were expected to stay at home. Marian was a pioneer and inspiration for women who strived for a career outside the house. She survived and thrived in a “man’s world” and helped to blaze a trail for many women over the years who wanted to follow the same path. With an incredibly creative mind and extraordinary writing talent, she helped develop some renown marketing campaigns, including creating the original baseball cards for the Kansas City Athletics and bringing the now Sacramento Kings to Kansas City during its heyday in the 1970’s. She finally retired from advertising in 2012 when she was 82. Marian was an ardent supporter of the Jewish Community Center. It played a crucial role in her upbringing as a place where she engaged in several social activities and met lifelong friends. She also participated in sports there. At 5’1” tall, she played on the Center’s basketball team and developed a lifelong passion for the sport. Throughout the years, she stayed committed to the Center as a volunteer, fundraiser, Vice President for several years under three different presidents and a member of its Board of Directors. Throughout her life, she was acknowledged several times for her professional and volunteer work. She was named Woman of the Year, Kansas City Ad Club in 1985; recipient of the New Leadership award, Jewish Welfare Board, 1980; the Isidore Beierfeld Memorial Award for service to the Jewish Community Center, 1981; Special Olympics award Joseph P. Kennedy Foundation, 1981; American Women in Radio and Television Broadcast Pioneer Award, 1984. Beside sports, some of her other passion included bridge, Mah Jongg, all types of word and puzzle games, poker and blackjack. She also loved genealogy. She knew the family tree dating back generations like the back of her hand. Relatives on both her side and her husband’s side of the family turned to her first to find out who was connected to whom. She relished the role. Marian was a member of Kehilath Israel Synagogue; NCJW; Hadassah and B’nai B’rith Women. Marian was preceded in death by her beloved husband of 32 years, Brad Shear, who died in 1990. She is survived by her loving, devoted daughters: Lisa Settles, of Olathe KS and Barbara Shear, of New York City; her son-in-law: Marty Settles; a granddaughter: Barbara Settles. Marian was preceded in death by her brother, Albert Margolin; sister, Elsie Spitcaufsky; her grandson, Micah Settles; and two nieces, Gerean Rudnick and Marilyn McKenna. She is also survived by many loving nieces, nephews and cousins. The family wishes to thank the staffs of Kansas City Hospice House, the Atriums and Lucille Tutera for their love and care. The family especially wishes to express deep gratitude to Drs. Donald Cohen and Stephen Bloom, Marian’s long-time physicians, for their extraordinary, outstanding care and concern throughout the years. In lieu of flowers or food, the family requests contributions to the Jewish Community Center, The American Heart Association or the charity of one’s choice. Funeral services will take place at 11:00am Monday, February 5, 2018 at The Louis Memorial Chapel, 6830 Troost Avenue, Kansas City, MO 64131, with burial to follow at Kehilath Israel Blue Ridge Cemetery, 1901 Blue Ridge Blvd, Independence, MO 64052.

The family of S.MARIAN M. SHEAR created this Life Tributes page to make it easy to share your memories.