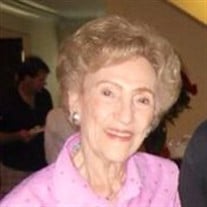 Sadelle Marion Moss, 93, passed away Friday, September 19, 2014 at The Atriums. Graveside services will be held Tuesday, September 23 at 3:00 pm in Richfield, MN at Gemelus Chesed Cemetery. Kindly omit flowers; the family suggests contributions to Kansas City Hospice and Palliative Care or the American Cancer Society. Sadelle was born in Chicago, IL, the daughter of Benjamin and Lena (Genoff) Solomon. She was raised in Minneapolis, MN and attended the University of Minnesota. After a short engagement she married her late husband, Harold, in 1941. Later they moved to Kansas City where Harold began his career with Helzberg Jewelry, retiring as a vice president. Sadelle’s greatest passion was music, especially singing. She sang throughout her life beginning as a child, sang in college and then professionally using the stage name Toby Laverne. She was primarily a homemaker while raising her daughters, Ellen and Betty, working occasionally. In later years she enjoyed getting together with friends for a weekly game of Pan or Mah Jong. Family was very important to her and she especially loved her grandchildren and great-grandchildren, even though they do not live in Kansas City. Sadelle was preceded in death by Harold in 1992; daughter: Ellen Olivia Feldstein; brother: Alfred Solomon, both in 2004. She is survived by her daughter and son-in-law: Betty and Jack Abelson, Leawood, KS; grandchildren and their spouses: Matthew Abelson and Laura Fay, Philip Abelson and Rebecca Saenger, Wendy Feldstein and her companion Kayne Stoll and Brian and Grace Feldstein; great-grandchildren: Lucas, Alexa, Sydney, Elizabeth, Alex, Jayden and Penelope; son-in-law: Burton Feldstein.

The family of Sadelle Marion Moss created this Life Tributes page to make it easy to share your memories.