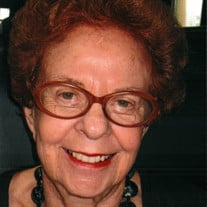 Sally Turk Tranin, born April 16, 1930, passed away Friday, February 17, 2017. Funeral services will be 10:30am Sunday, February 19, 2017 at The Louis Memorial Chapel, 6830 Troost Avenue, Kansas City, MO with burial to follow at Kehilath Israel Blue Ridge Cemetery. Kindly omit flowers; the family suggests contributions to the Jewish Community Foundation for the Sally Tranin Village Shalom Employee Education Fund, 5801 West 115th Street, Overland Park, Kansas 66211, to Planned Parenthood, or to the American Civil Liberties Union. Ms. Tranin had a unique perspective on life and was ahead of her time in many ways. Sally grew up in Tulsa, Oklahoma, with parents Emil and Dorothy Turk and sister Irene. It was there she honed her corny sense of humor. Her favorite joke was to ask everyone, regardless of whether she knew them or not, if they wanted a three-piece chicken dinner. She would then open a small wooden box containing three pieces of corn. This joke never got old. Sally and Don attended several presidential inaugurations. We can only surmise that the Secret Service had been forewarned or else Sally would surely have offered a chicken dinner to each president in turn. Sally earned a MSW at Washington University, then worked for the Girl Scouts in St. Louis. She met Donald Tranin at a wedding there. He wooed her long distance, driving across the state for dates until she consented to a marriage that was to last 54 years until his death. In addition to being mother to Laura and Ed, Sally was a prize-winning tennis player, a philanthropist, globe trotter, gardener, and angler. In the 1980’s and 1990’s, Sally organized parties for Jewish singles to meet, and is responsible for multiple marriages. These popular parties became widely recognized as “The Tranin Parties”. She delighted in theater, attending plays, supporting local theater groups, and writing her own historical play. She was an active supporter of the Women’s Jazz Festival. Sally was an early adopter of holistic medicines and supplements. She was very involved in liberal causes, including civil rights, reproductive rights, and homelessness. A life-long Democrat, she helped many candidates into office over the years with tireless campaigning. She also served as Chairman of the Board for the Kansas City Board of Election Commissioners. Sally returned to graduate school at Avila University for studies in counseling and guidance. Much of her work over the years was with children, including a preschool under the VISTA program. Sally wrote a children’s book that reassured a generation of youth concerned about thunderstorms. She was extremely dedicated to her husband and was his caregiver until his passing in 2007. She is survived by son and daughter-in-law: Ed and Amy Tranin, Leawood, KS; daughter and son-in-law: Laura Tranin and Alan Greenstein, Seattle, WA; sister and brother-in-law Irene and Irving Fenster, Tulsa, OK; sister-in-law Shirley Morantz, Leawood, KS; and grandchildren: Alex, Nathan, Emily, and Lewis. The family wishes to thank Village Shalom and Kansas City Hospice for the excellent care she received.

The family of SALLY TURK TRANIN created this Life Tributes page to make it easy to share your memories.