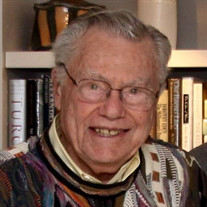 Sam Gould, 98, of Overland Park, KS, passed away September 20, 2015. Services will be held at Louis Memorial Chapel on Thursday, September 24, 2015 at 12:00pm. Burial will follow at Kehilath Israel Blue Ridge Cemetery. In lieu of flowers, contributions may be made to The Jewish Community Center, The Hyman Brand Hebrew Academy, or to Kehilath Israel Synagogue. Sam was born May 29, 1917 in Kansas City, MO to Harry and Ida Goldstein. Sam’s love for baseball began early in life when his family moved across the street from the old Municipal stadium at 22nd and Brooklyn. Along with being an errand and bat boy for the Kansas City Blues, Sam would also watch and park cars which led him to open Sam’s Parking in 1950. He operated and managed many parking lots throughout Kansas City over the years with his wife Lucy at his side. Sam served on the original committee to bring the Kansas City A’s to town in 1955. He was a central advisor to the Kansas City Royals assisting the organization with parking logistics, and was the original operator of the Chiefs Stadium parking lots. Sam was a charter member of both the Kansas City Royals Lancers & the Kansas City Chiefs Red Coaters and was a Buck O’Neil Legacy Seat Honoree in 2009. Sam’s love for baseball and sports was matched only by his love for the Jewish community. He was a long time member of Kehilath Israel Synagogue, a lifetime K.I. Board Member, and served as K.I. President in both 1973 and 1979. Sam also served as a Board Member of the Jewish Geriatric Center and the Hyman Brand Hebrew Academy. He was a member of the Jewish War Veterans and B’nai B’rith. Throughout his life the Jewish Community Center served as Sam’s ‘home away from home’. His love of baseball and the JCC was affirmed when Sam bestowed lights for the fields at the JCC which now provides day and night baseball to enable over 1,000 little leaguers and adult softball players. Later in life Sam served as Chairman of the S.M.A.R.T. (Sports Minded Adults Reminiscing Together) Men’s Group that brought sports related celebrity speakers to breakfast events at the JCC. Sam was preceded in death by his parents; his wife, Lucy Gould; sister, Rose Eisberg; nephew, Jeffrey Eisberg; fellow superstars Mickey Mantle and Babe Ruth. Survivors include his daughter, Susan Barrows; cousins, Harold Esrig and Ruth Vrinn; and nephews, Howard Eisberg and wife, Cathy Kirby and Gary Eisberg and wife, Susan; as well as his companion, Leah Gladstone. The family would like to extend a special thank you to all the wonderful caregivers who helped Sam during these last few years and to Denny Matthews for providing Sam with the play-by-play. Great game Sam!

The family of SAM GOULD created this Life Tributes page to make it easy to share your memories.