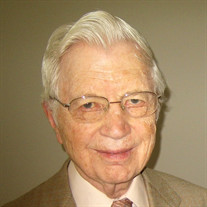 Sam Harry Hipsh, 95, of Leawood passed away on August 14, 2014. The son of Phillip and Esther Hipsch, Sam was born November 23, 1918 in Kansas City, Missouri and was a lifelong resident. He married Helen Kupperman on June 29, 1947. Sam graduated from Central High School and received his communication license for radio and telegraph from Kansas City Junior College. He was hired by the CAA (Civil Aeronautics Administration, later the FAA) and was sent to an airbase in Alaska during WWII. He later served in the United States Army. Returning to Kansas City, he was rehired by the CAA to work in the Airport Tower at the Kansas City Municipal Airport, where he was one of the last people evacuated from the airport during the 1951 flood. He started Admiral Flag and Specialty Company, selling all kinds of flags, banners, pennants, flag poles and specialty items. Aided by his wife Helen, who performed the bookkeeping side of the business, Sam continued his business for almost 60 years until his death. He was a member of The Temple, Congregation B’nai Jehudah and a member of the Brotherhood there for many years. Sam was preceded in death by his siblings, Edward Hipsh, Carl Hipsh and Evelyn Hipsh Behrman. He is survived by his wife of 67 years, Helen Hipsh. He has two daughters, Louise Hipsh (Neil Breslow), Judy Glassman (Mitchell Glassman) and three grandchildren, Daniel Glassman (Lisa Haas Glassman), Ben Glassman, and Beth Breslow. Services will be held at 1:30pm Sunday, August 17, 2014 at The Louis Memorial Chapel, 6830 Troost Avenue, with burial to follow at Rose Hill Cemetery. Donations can be made to The Temple, Congregation B’nai Jehudah or the charity of your choice. Many thanks to CareStaf and Grace Hospice.

Sam Harry Hipsh, 95, of Leawood passed away on August 14, 2014. The son of Phillip and Esther Hipsch, Sam was born November 23, 1918 in Kansas City, Missouri and was a lifelong resident. He married Helen Kupperman on June 29, 1947. Sam graduated... View Obituary & Service Information

The family of Sam Harry Hipsh created this Life Tributes page to make it easy to share your memories.