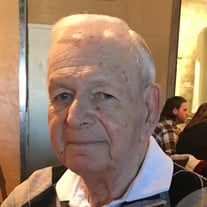 Sanford L. Cohn, 88, of Leawood, Kansas, peacefully passed away on January 11, 2017 at St. Joseph’s Hospital, with his loving son and caregiver by his side. Funeral services will be 11:00 am on Friday, January 13, 2017 at the Louis Memorial Chapel, 6830 Troost Ave. in Kansas City, Missouri, with burial to follow at Rose Hill Cemetery. In lieu of flowers, the family suggests contributions to the charity of one’s choice. Sandy was born on March 10, 1928 in Kansas City to R. Robert and Anna Cohn. He graduated from Southwest High School and attended both M.U. and Rockhurst College. He served in the Army twice. He married his high school sweetheart, Barbara “Bobbie” Fishman on June 29, 1952, where they shared nearly 56 very happy but challenging years together, before her death in 2008. Also in June, 1952, Sandy started working at the local Guardian Life Insurance Agency office, owned and run by Shale Goodman, who would become a lifelong friend and mentor. Together, they were an unstoppable force of nature and Sandy became enormously successful under Shale’s tutelage, attaining the highest accolades the company awarded. He was a qualifier of the President’s Council, the Senior Sales Advisory Committee; he was President of the Leader’s Club and most especially, was awarded Man of The Year for the company. He served on the Boards of Director for numerous institutions, including UMB, and several Jewish Community Foundation charities. He was a supporter of Junior Achievement, De La Salle, and charities too numerous to mention. Eventually Sandy took over the business and The Sanford L. Cohn Company was formed. Sandy wrote insurance for many local and national prominent companies and individuals, including Ewing and Muriel Kaufman; and even had K.C. Chief’s players, such as Ed Podolak, working for him. As president of Meadowbrook Country Club, he oversaw the building of their last clubhouse. He loved to golf and was a sports fanatic… His wife Bobbie insisted if he ever returned from the afterlife, he’d come back as a baseball manager. He was a member of the C.L.U., Temple B’nai Jehudah and was a quiet and generous philanthropist of numerous charities. He was a loyal and trusting friend to everyone, well-respected and admired by all, and became an inspiring mentor to many young businesspeople. He only recently retired from the business in January, 2015, at age 86. Sandy was preceded in death by his parents, his wife and his brother Kenneth. He is survived by his son, David, of Overland Park, and his sister, Elaine Zax, of Dana Point, CA, along with numerous nieces, nephews, friends and many cousins, and companion Marcia Temple. The family wants to thank all the compassionate, dedicated and extraordinary care-givers headed by Linda Meadows, owner of Okelani Home Health Care.

The family of SANFORD L. COHN created this Life Tributes page to make it easy to share your memories.