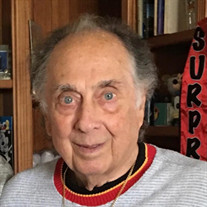 Our father, Sanford Allen Nadlman, of Marina Del Rey, CA, formerly of Kansas City, MO, passed away peacefully on Wednesday, September 30, 2020 at the age of 87. He was born December 14, 1932 to parents Ben Nadlman and Rose Demott (Rabinov) in Kansas City, Missouri. Growing up in Los Angeles, Sandy attended Venice High School, playing baseball, hanging out at the beach, and racing midget sports cars. Sandy was hospitalized for months in a full body cast for a slipped epiphysis. He left high school to join the California National Guard, worked in garages and rebuilt hotrods. Sandy moved with his family to Kansas City as a young teen, but he loved California and the beach, and would return for good decades later. In 1953 he married the love of his life, Barbara Jean Nadlman (Schanker). Each Sunday afternoon, Sandy and Barbie would take a long drive into the country, just for fun. They would drive for hours, singing together and holding hands. They created a beautiful life, raised a family, and spent 60 years together until her death in 2013. Sandy worked hard and moved up the ladder at Swingster Apparel for 27 years with only a high school education. His giant personality and love for life was contagious to anyone who crossed his path. His love of sports continued, and he enjoyed playing aerial tennis and coached youth baseball at the KC Jewish Community Center for more than 20 years. There was never a stranger in his home, and every room was filled with pictures of his loved ones and his treasured collection of Mickey Mouse memorabilia. He was incredibly social and at his most content spending time with family, friends, and co-workers. Everyone was greeted with open arms, which was typically followed with an offering of something to eat. He loved BBQ, pastrami, corned beef, hot dogs, Kosher salami and pickles. Few things made Sandy as happy as having a big, fluffy dog at his feet. He and Barbara adored their many dogs and treated them like family. Sandy relished sharing stories about his life, like how he put together two life-long couples who are still married to this day; Hal and Reggie Present of Playa Del Rey, CA, married in 1952, and Stanley and Noreen Rosenblum of Kansas City, MO, married in 1979. He was especially proud of his family and felt blessed. Sandy leaves behind his daughter Michelle Heffron and husband David of Overland Park, KS; grandson Ben Koven, his wife Elizabeth and great-grandsons Neil and Noah of Bonner Springs, KS; granddaughter Sara Beth Koven and her wife Cathleen Marston of Atlanta, GA; son Jay Nadlman and his wife Kathy of Leawood, KS; grandsons John Bergwell of Los Angeles, CA, Nick Bergwell of Brooklyn, NY, and Andrew Nadlman of Chicago, IL; and his brother, Jeff Nadlman, and his wife Melissa of Round Rock, TX. The family would like to thank Ladera Vista Assisted Living, with a special thank you to Trecia Lopez for the care provided. Sandy and Trecia had a special bond. Sandy had a wonderful voice and would burst into song at any moment – when he was happy or sad or just because. He loved old show-tunes, Frank Sinatra, but mostly songs from the 40s and 50s. One he often sang at Ladera Vista was Bing Crosby’s Blue Room. When he sang the song’s lyric, “Every day’s a holiday, because you’re married to me,” it was infectious, and the staff would hum and sing it as well. Every day was a holiday when you were around Sandy. A private funeral was held graveside at Hillside Memorial Park on October 2, 2020 in Los Angeles with Rabbi Alan Lachtman of Temple Beth David presiding. Sandy is buried next to Barbara. In lieu of flowers, the family requests memorials to the Kansas City Jewish Community Center or a charity of your choice.

Our father, Sanford Allen Nadlman, of Marina Del Rey, CA, formerly of Kansas City, MO, passed away peacefully on Wednesday, September 30, 2020 at the age of 87. He was born December 14, 1932 to parents Ben Nadlman and Rose Demott (Rabinov) in... View Obituary & Service Information

The family of Sanford Allen Nadlman created this Life Tributes page to make it easy to share your memories.