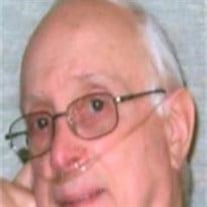 Sanford Edward Hipsh, 80, died at home April 29, 2012. Funeral services 10:00am Tuesday, May 1, at The Louis Memorial Chapel with burial at Kehilath Israel Blue Ridge Cemetery. Donations to Ohev Sholom Synagogue. Sanford was born in Kansas City. At age 2 the family moved to Oklahoma City where his father ran the Men’s Furnishing Department in the Katz Drug Company. At age 8 the family moved to Holden, Missouri where his father ran a factory that made fatigues for the Army. When Sanford was a freshman in high school he went to Wentworth Military Academy in Lexington, Mo and graduated in 1949. He attended the University of Missouri and was in Sigma Alpha Mu Fraternity. After 3 years he enlisted in the Army Reserves. He was a Corporal. He returned to the University of Missouri and graduated with a BS in Mechanical Engineering. Sanford moved to CA where he worked on high speed anti-aircraft missile systems. While in Calif. he earned a pilot’s license and soloed in a Piper. When his job ended, Sanford drove to NY and lived in Brooklyn for 3 months. Every day he took the train into New York City and went to the Metropolitan Museum of Art. When his money ran out he took a job in El Mira, New York. Later he went back to the University of Missouri where he worked on his Masters in Electrical Engineering until he moved to St. Louis to work for Emerson Electric in their Space Division. They sent him to McDonald Douglas. Next, Sanford worked on automated systems in Huntsville, Alabama and did mathematical modeling in Erie, Pennsylvania. Upon returning to Kansas City Sanford was in charge of computer departments at several companies and also designed oil converters. Eventually he was contracted to the Department of Agriculture because he knew certain computer intricacies. He worked for the Finance Office of the Crop Insurance Corporation. He designed a finance package called Escrow, a program used for crop insurance, still in use today. After retirement in 1989, Sanford became actively involved at Congregation Ohev Sholom. It became an important part of his life and the people there became his family. He loved to study Judaism and he attended minyan 3 days a week. He loved art, books, movies and international food. Sanford loved to gamble and play cards. Sanford was predeceased by his parents Esther (Myerson) and Martin Hipsh and an older brother Harold Hipsh. Sanford leaves behind his beloved companion of many years, Carol Peltzie; his cousins Miriam Hipsh, Nancy Hipsh Wolff and Harlene Hipsh. He also leaves many dear friends he loved and who loved him in return. He will be greatly missed.

The family of Sanford Edward Hipsh created this Life Tributes page to make it easy to share your memories.