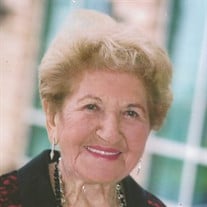 Sara Mittelman, 97, was born May 10, 1917 and died August 15, 2014 at Menorah Medical Center. Funeral services will be at 4:00pm Sunday, August 17, 2014 at The Louis Memorial Chapel, 6830 Troost Avenue, Kansas City, MO with burial to follow at Mt. Carmel Cemetery. Sara was born in Pilica, Poland and came to the USA in 1950. She was a Holocaust survivor who lost her entire family during the war. She was one of the oldest survivors in the Kansas City area. She and her beloved husband, Israel Mittelman, fled to Russia where they were jailed until the war ended. They then came to Kansas City with their children Harry & Marie to start a new life. Sara was a loving wife, mother, grandmother and great grandmother. Her family was the center of her life. She was an active member of Beth Shalom Synagogue, its Sisterhood and Hadassah. Sara attended Shabbat services every week at Beth Shalom. She and her husband were instrumental in starting the New American’s Club where they had many beloved friends. They had many events and fundraisers and had a wonderful time together. Since most of them had lost many family members, they were all a big family to each other. They were also instrumental in bringing the Holocaust Memorial to the Jewish Community Center of Greater Kansas City, one of the first in the United States. Sara and Issie started their own business in 1956 called Mittelman Furniture Co. It was a great success and enriched their lives for many years. After their son-in-law started running the business, they were able to spend many years in Florida and had a very special set of friends there too. Despite her petite stature, Sara had an incredible strong will which helped her in conquering life’s challenges. She was very wise and inspirational to all that met her. She will be missed by the many people whose lives she touched. Sara was very involved in her synagogue life and very philanthropic. She established the patio for the Heritage Center and the Kotel “Wall” at the Child Development Center at the Jewish Community Center. Her last years were spent at Town Village in Leawood. She truly enjoyed her life there and the many friends she had, as well as the wonderful staff who helped care for her. She was preceded in death by her entire Mendelson family in Poland, her husband, Israel, in 1995 and her brother-in-law, Geniek Mittelman. She is survived by her children, Harry & Brenda Mittelman, Marie & Phil Koffman, and was “Gaga” to her grandchildren, Robin Kaplow, Michael Mittelman, Brad & Amanda Koffman, Kerry & David Kuluva, David & Stephanie Rudd, Lee Ann & Paul Steffen and her 14 great-grandchildren. Also surviving is her loving extended family and many wonderful friends. In lieu of flowers, the family requests donations to Hadassah, Beth Shalom Synagogue, Midwest Center for Holocaust Education or a charity of one’s choice.

The family of Sara Mittelman created this Life Tributes page to make it easy to share your memories.