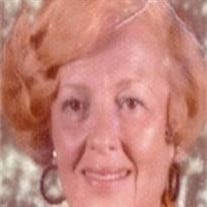 Sara Gertrude Lapid left us peacefully on April 10, 2012 with her daughter Elyse and friends by her side. Sara was born to Kasil Jaben and Chie Rive on April 12, 1920 in Ciechanowiec, Poland. It is believed Sara and her mother Chie immigrated to the United States on February 3, 1927, joining her father Kasil and soon settled in Kansas City Missouri. Even as an infant, her father recognized Sara was intuitive, bright and would be an essential partner in the family business. Sara proved her father correct; she was a born business woman. Sara’s business acumen didn’t stand in her way of also being a devoted mother, a loving sister and a friend to many. Others would often look to Sara for her strength, guidance and what to most was simply common sense. Sara was there when you needed her. She married Herman Clurman on September 22, 1940. Together they had two children, a boy and a girl. Sara and Herman were together for more than 30 years, and while they ultimately grew apart, their love for their children always remained a bond between them. Herman passed away in 1972 at the early age of 53. In the mid-1970”s, Sara married Jerry Lapid. For over 35 years Sara and Jerry enjoyed life, traveling to many foreign countries with close friends and family. Regretfully, we lost Jerry in February, 2010. In recent years, Sara moved closer to her daughter Elyse who assumed responsibility for her care. While suffering from Alzheimer’s, Sara remained an engaging individual, who loved music and the joy of people, especially the young who continually showed her the true meaning of life. She leaves behind her loving daughter Elyse Cipolla (Peter), her son Stephen Clurman (Ruth Anne), and her sister Etta Brenner and brother Larry Jaben (Helen) along with their families including a bevy of nephews, nieces and grandchildren. Sara will be missed by all who knew and loved her. Funeral services will be at 11:30am Sunday, April 15 at The Louis Memorial Chapel, 6830 Troost Ave. followed by burial at Kehilath Israel Blue Ridge Cemetery. In lieu of flowers, Sara’s family requests donations be made in Sara’s name to the National Alzheimer’s Association.

Sara Gertrude Lapid left us peacefully on April 10, 2012 with her daughter Elyse and friends by her side. Sara was born to Kasil Jaben and Chie Rive on April 12, 1920 in Ciechanowiec, Poland. It is believed Sara and her mother Chie immigrated... View Obituary & Service Information

The family of Sara Gertrude (Jaben, Clurman) Lapid created this Life Tributes page to make it easy to share your memories.