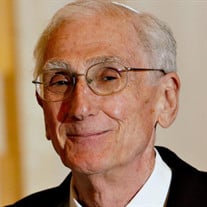 Sheldon Wishna, of Overland Park, passed away peacefully, after a brief illness, on April 2, 2018, at the age of 83. Sheldon’s son, Victor, and daughter-in-law, Annie, were by his side, as were his in-laws, Merilyn and Loren Berenbom. He is also remembered with love by his grandchildren Vivien and Abraham Wishna, and by his numerous extended family and dear friends. The son of the late Betty and Julius Wishna, Sheldon was born September 6, 1934, in Brooklyn, N.Y. He studied electronic engineering and communications technology at Brooklyn College and the City College of New York and earned a masters degree from Columbia University. He embarked on an adventurous career that would take him around the world and even to the new frontier of outer space. As a young engineer at International Telephone and Telegraph (ITT), he worked on top-secret radar countermeasures for the United States Air Force and European allies. At Kollsman Instruments, Sheldon became the lead engineer in designing optical “simulated environments”--a forerunner of today’s virtual reality--used for training by the military and, later, the U.S. space program. In 1964, he moved to the National Aeronautics and Space Administration, where he helped develop simulators for the Apollo moon missions and supervised the rapid advances in satellite communication technology. He also served as a NASA liaison to the European Space Agency, which recruited him for a permanent position in Paris; homesick, he declined. Instead, Sheldon’s destiny lay in Kansas. While living in Washington, D.C., he met Jeanette Lerner, a young White House staffer originally from Prairie Village, and after marrying in 1972, they moved together to Overland Park. Sheldon began what would become a nearly 30-year career with the U.S. Department of Agriculture’s Federal Grain Inspection Service, and become actively involved at Congregation Beth Shalom, B’nai B’rith, and other community organizations. His favorite new job was that of dad to Victor, which was really a series of duties: soccer coach, math teacher, chess tutor, Sunday-school chauffeur, and science-project supervisor, among many others. After retiring and then losing his beloved Jeanette to cancer in 2008, Sheldon took his unexpected independence and made it his cause, preaching and practicing self-sufficiency for seniors. He became a fixture at the Jewish Community Center’s Heritage Center, planning seminars and daytrips, and gave of his time and skill to the institutions that he and Jeanette cherished, such as Beth Shalom and the Kansas City Jewish Archives. In the last years, he enjoyed regular Sunday outings with his close companion Martha Keleti. And he embraced his ultimate role as “Zadie Sheldon” to little Vivien and Abe. Until his final moments, Sheldon was developing new ideas of how to do things better and help others. He was always available to family and friends for advice, support, and encouragement, and will be remembered and cherished for his intelligence, sense of “yumor,” initiative, and commitment. He was dearly loved and will be terribly missed by many, but will live on in their hearts and memories, and through the kindness of those who follow his noble example. A funeral service in memory of Sheldon will be held on Wednesday, April 4, at 10 a.m., at Louis Memorial Chapel, 6830 Troost Avenue, Kansas City, Missouri. Interment will follow at Mount Carmel Cemetery. Contributions in memory of Sheldon may be made to the Jeanette and Sheldon Wishna Donor Advised Fund at the Jewish Community Foundation, or the charitable organization of your choice.

Sheldon Wishna, of Overland Park, passed away peacefully, after a brief illness, on April 2, 2018, at the age of 83. Sheldon&#8217;s son, Victor, and daughter-in-law, Annie, were by his side, as were his in-laws, Merilyn and Loren Berenbom.... View Obituary & Service Information

The family of SHELDON WISHNA created this Life Tributes page to make it easy to share your memories.

Sheldon Wishna, of Overland Park, passed away peacefully, after...