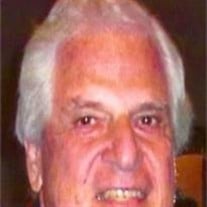 Sheldon Paul Hollub of Overland Park, Kansas passed away on January 15, 2011, at Menorah Medical Center with his family by his side. Shelly was born on December 24, 1930, in Chicago, Illinois to Sol and Mae Hollub and lived there for 20 years. He attended Senn High School and Wright Junior College. He continued his education at the University of Missouri where he met the love of his life, JoAnn Simon. He was a member of Phi Sigma Delta fraternity there. After Shelly and JoAnn wed in 1951, he served in the United States Army in Korea. Upon completion of his service in the army, he finished his education at UMKC. He joined Anchor Roofing Company after his graduation and subsequently retired as its president in 1989. Shelly loved his vacation home in the Ozarks, playing poker with his many friends, going to Chiefs games, traveling to Florida and other destinations, the ROMEOs and most of all his children, grandchildren, and great-granddaughter. Shelly was predeceased in 2007 by his wife of 56 years, JoAnn, and also by his son, Danny, in 1988. He is survived by a son, Seth Hollub (Kari), Sebastopol, California, and daughters, Lynda Hirsekorn (Howard), Lenexa, Kansas and Mickie Peppes (Greg), Leawood, Kansas. His grandchildren, Sydney Hirsekorn, Steve Peppes, Matt Peppes, Emily Hirsekorn, Jake Hirsekorn (Shayna), Sara Peppes and Jordan Hollub and great-granddaughter, Joanna Hirsekorn, will miss “Papa” with all their hearts. Shelly also leaves a brother, Elliott Hollub (Kathy), Leawood, Kansas and nieces Robin Kaplan (Jerald), Orlando, Florida and Patty Hollub, Leawood, Kansas. Special thanks and appreciation go to the doctors, nurses and therapists at Menorah Medical Center’s ICU for their loving care and support during his stay there. In lieu of flowers the family suggests donations be made to the City of Prairie Village, c/o Daniel Hollub Memorial Rose Garden, 7700 Mission Road, Prairie Village, KS 66208 or a charity of your choice. Funeral services will take place on Tuesday, January 18, 2011, at 11:30am at The Louis Memorial Chapel, 6830 Troost Avenue, Kansas City, Missouri 64131, followed by burial at Mt. Carmel Cemetery.

Sheldon Paul Hollub of Overland Park, Kansas passed away on January 15, 2011, at Menorah Medical Center with his family by his side. Shelly was born on December 24, 1930, in Chicago, Illinois to Sol and Mae Hollub and lived there for 20 years.... View Obituary & Service Information

The family of Sheldon Paul Hollub created this Life Tributes page to make it easy to share your memories.