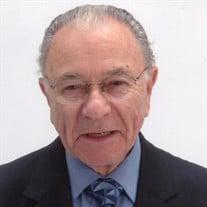 With gratitude for a long life well-lived, the family of Sherrill Friedman announces his passing on May 1, 2018, at age 96. Sherrill was a dedicated son, husband, father and grandfather. Funeral services will be at 11:00AM, Friday, May 4, 2018, at The Louis Memorial Chapel, 6830 Troost Ave., Kansas City, Mo. with burial to follow at Kehilath Israel Blue Ridge Cemetery. In lieu of flowers, the family suggests contributions to Kehilath Israel Synagogue. Sherrill was born December 29, 1921. He attended Washington University at the age of 16 and by his fourth year was in Washington University Law School. Sherrill graduated in 2 years so that he could enroll in the Navy and specifically the Midshipman School at Notre Dame. Like so many other selfless young men who literally saved the world, he spent D-day at Omaha and Utah beach taking troops to shore. Subsequently, he sailed for North Africa and ultimately was a part of the Invasion of Southern France. He concluded his service time in Iwo Jima and came home in June 1946. Rather than going into law, Sherrill joined his brother-in-law in the hardware business. In 1959 they decided to go into the fireplace business exclusively and Troost Fireplace and BBQ Center was born at 55th and Troost. He retired under the store mandatory retirement age of 80! In 1956 Sherrill and Elinor Kessler married and remained life-long partners for nearly 61 years until Elinor’s death in 2017. Throughout his life he was dedicated to his Jewish religion and to Kehilath Israel Synagogue where he and his family were founding members. His singing voice was beautiful and he loved leading the High Holiday Services and often Sabbath services for so many years. Post his retirement he attended as many religious classes as he could and became well known for his deep knowledge, thoughtful expression and conviction of opinion. Sherrill was preceded in death by his wife, Elinor, his parents, Morris and Frieda Friedman and a sister and brother-in-law, Helen and Phillip Sweet. Sherrill is survived by sons: Frank Friedman (Sondra) of Leawood; David Friedman (Diane) of St. Louis; and daughter Marsha Friedman of Overland Park; five grandchildren: Adam, Micah, Jeremy, Lily and Rachel. We want to especially thank and express our gratitude for his wonderful caregivers: Mary, Nikki, Clifford, Janice and Toni. Sherrill was a kind and gentle person with a wonderful smile, a big laugh, and a warm and meaningful handshake. We will miss him.

With gratitude for a long life well-lived, the family of Sherrill Friedman announces his passing on May 1, 2018, at age 96. Sherrill was a dedicated son, husband, father and grandfather. Funeral services will be at 11:00AM, Friday, May 4, 2018,... View Obituary & Service Information

The family of SHERRILL FRIEDMAN created this Life Tributes page to make it easy to share your memories.

With gratitude for a long life well-lived, the family of Sherrill...