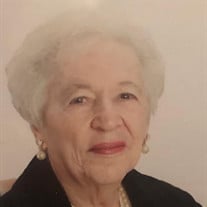 Shirley Irene Bitner, 93, of Overland Park, KS, passed away on Sunday, April 21, 2019. Graveside services will be held at 1:30pm Tuesday, April 23, 2019 at Mt. Carmel Cemetery. Kindly omit flowers; the family suggests contributions to the Leukemia and Lymphoma Society, Kansas Palliative and Hospice Care, or a charity of one’s choice. Shirley Bressel was born on September 3, 1925, in Kansas City, MO, and was a lifelong resident. She was the daughter of the late Izzy and Pauline Bressel and a first generation American. Shirley attended Paseo High School, class of 1942, where she was a member of the Zeta Kappa Delta sorority. Shirley married her sweetheart and husband of 58 years, Saul Bitner, in the fall of 1945. Shirley worked for the Kansas City Branch of the Internal Revenue Service for more than 20 years. Upon her retirement in 1985, she was honored with the Albert Gallatin Award by the Department of Treasury. Shirley was proceeded in death, by her husband, Saul Bitner, and her son, Gary Stephen Bitner. Shirley is survived by her daughter; Linda Bitner Sugerman, granddaughters; Arin Sugerman Council (Bryan) and Jennifer Sugerman, sister; Evelyn Baru, and great-granddaughters; Addison Paige Council (named in memory of Pauline Bressel) and Harper Shea Council (named in memory of Saul Bitner).

The family of Shirley Irene Bitner created this Life Tributes page to make it easy to share your memories.

Shirley Irene Bitner, 93, of Overland Park, KS, passed away on...