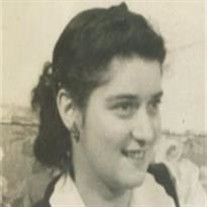 Shirley Hammer, 88, of Lenexa, KS, passed away Sunday, December 26, 2010 at Village Shalom. Funeral services will be 10:30am Friday, December 31, at The Louis Memorial Chapel, 6830 Troost Avenue. Burial at Rose Hill Cemetery. Kindly omit flowers; The family suggests contributions to Village Shalom, 5500 W. 123rd St, Overland Park, KS 66209. Shirley worked as a teletype operator for the U.S. Government during WWII, then raised her family in New York. She then worked for the City of New York as a clerk in the Department of Finance until her retirement in the mid 1980’s. Shirley spent her retirement in Tamarac, FL before moving to the Kansas City area in June, 2010 to be near her son and daughter-in-law. She was very active at the Tamarac Community Center and crocheted more than anyone else her daughter-in-law knows. She was great at movie and actors trivia, had a great memory for names and dates and played mah jongg. Shirley was preceded in death by her parents, Benjamin and Yetta (Faden) Tavel and her husband of 65 years, Meyer Hammer, who died in 2008. She is survived by her son and daughter-in-law: Wayne and Julie Hammer, Lenexa, KS; daughter: Cheryl Lally, Port St. Lucie, FL; brother and sister-in-law: Jerome and Barbara Tavel, Baldwin, NY; 5 grandchildren and 3 great-grandchildren.

The family of Shirley Hammer created this Life Tributes page to make it easy to share your memories.