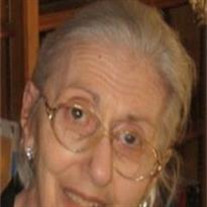 Shirley Hellman died peacefully at Kansas City Hospice House on May 30, 2013. A memorial service will be held at 10:30am on Monday, June 3rd at Congregation Beth Torah, 6100 W. 127th Street, Overland Park, KS. She was preceded in death by her husband, "Baker Ben" Hellman, just last year after 63 years of marriage. She is survived by her daughter, Marcia (Chuck) Perkins, of Overland Park, KS and her beloved grandchildren, Stephanie (Amanda) of Springfield, MO and Jeffrey Perkins of Houston, TX. Others she would consider are friends and family, new and old, and the many care assistants at The Atriums over the past 7 years who became family and friends. Shirley was born October 28, 1929 at St. Joseph Hospital in KCMO, the only child of Hyman and Mary Lansky. She was a lifelong area resident, attending Wyandotte High School and just recently reconnecting with classmates at a 65th high school reunion. While at Wyandotte, she loved doing background clerical work and facilitating for many of the extra-curricular clubs and activities. Ed Asner recently teased her about helping launch his life-long career from their shared radio show at Wyandotte High. She spent her youth alongside her parents at Hyman's Bakery at 5th & Minnesota in KCK. A blind date on New Year's Eve led to a courtship and Thanksgiving wedding to Ben Hellman, an Army veteran and journalism graduate from MU. Despite Shirley's warnings of long hours and hard labor, Ben joined the family business, working at Hyman's Bakery until the area was demolished for urban renewal. By then, daughter Marcia was too old to nap on stacks of flour sacks so Shirley immersed herself in Camp Fire Girls, room mother, PTA president and taking on tasks of fighting social injustice and discrimination. Shirley and Ben had a wonderful marriage. They were quirky and silly and often teased but fit each other perfectly. Shirley organized, and Ben did. They baked and generously donated to Beth Torah (where they were founding members) as well as to many of the arts they enjoyed. If you were a fan of the arts, you knew Shirley. Often in matching t-shirts, she and Ben soaked in the pleasures of Missouri Rep, Lyric Opera, KC Ballet, Unicorn, Kansas City Symphony, Quality Hill, Starlight, Theater in the Park, and more. Shirley and her granddaughter, Stephanie, are known for sharing 19 years of the Nutcracker Ballet, often joking that they don't have pictures of Stephanie with every year's Sugar Plum Fairy only because Stephanie was eventually taller and older than the Fairy ballerina, so she didn't have to do that part anymore. Becoming a grandma was the most joyous part of Shirley's life. She adored having the time to share museums and parks and picnics and theater with Stephanie and Jeffrey. She was someone they could talk with about anything, anytime, without fear of lecture, judgment, anger, or a mandatory solution...just a loving ear. Lastly, Shirley was resilient. She faced challenges with pragmatic determination. She often said, "It is what it is" or "We'll just do the best we can with what we've got." A lesson for us all. A life well lived.

Shirley Hellman died peacefully at Kansas City Hospice House on May 30, 2013. A memorial service will be held at 10:30am on Monday, June 3rd at Congregation Beth Torah, 6100 W. 127th Street, Overland Park, KS. She was preceded in death by her... View Obituary & Service Information

The family of Shirley Hellman created this Life Tributes page to make it easy to share your memories.