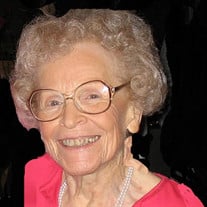 Shirley Levine, 91, of Overland Park, KS passed away peacefully on Sunday, March 11, 2018 at Village Shalom. Funeral services will be held at 11:00 am Tues., March 13, 2018 at The Louis Memorial Chapel, 6830 Troost Ave, KCMO 64131. Burial will follow at Sheffield Cemetery. In lieu of flowers, memorial contributions may be made to Congregation Ohev Sholom. Shirley was born in Kansas City, KS, the daughter of the late Pete and Rose Cohn. She was married to Arnold Levine for 55 years who preceded her in death. Shirley worked at the family furniture store after high school and during the war. Later in life, Shirley was the administrator at Kehilath Israel Synagogue. Shirley’s focus were family, music and volunteering. She taught music for over 25 years at Congregation Ohev Sholom and played piano for hundreds of weddings and special occasions. She was Sisterhood President and chaired many events at Congregation Ohev Sholom. In addition to her husband and parents, Shirley was also preceded in death by her brothers: Melvin and Martin Cohn; and her daughter, Sherry Krug. She is survived by her son, Joel (Beverly); daughter, Judy (Steve); grandchildren: Jessica, Josh (Amy), Michelle, Marc (Luba), Liora (Josh), Eliana (Daniel), Efrem (Neena) and 4 great-grandchildren. During her later years, Shirley lived at Village Shalom where she was very grateful for the care she received and they were grateful to have her as a resident.

The family of SHIRLEY LEVINE created this Life Tributes page to make it easy to share your memories.