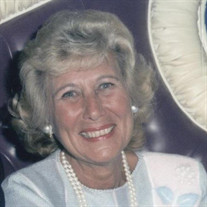 Shirley Rose, 101, of Leawood died in her home on Thursday, April 14, 2022. She was the daughter of Harry and Esther Mallin. The metropolitan Kansas City community is mourning the loss of one of its foremost female civic and business leaders of the last half of the twentieth century. Shirley and Stan Rose met at the University of Missouri, Columbia, where she earned a BA in Social Work. The couple were married in 1942. After World War II, Shirley and Stan started several publications throughout Kansas City. In 1950 the couple co-founded The Prairie Scout in Prairie Village which grew into a group of newspapers called Sun Publications. Shirley was the visionary who persuaded her husband to expand the newspapers throughout Johnson County. As co-publisher, she spearheaded the advertising efforts of the newspaper company, which became a major factor in the growth of Johnson County. Sun Publications thrived and diversified, including the eventual purchase of the Kansas City Jewish Chronicle. Stan and Shirley founded Some Enchanted Evening, an annual Gala benefitting the Johnson County Community College Foundation that raised millions of dollars for their scholarship fund. In 1991, they were the first couple designated Johnson Countians of the Year in 1991. They co-founded the American Cancer Society Gala Auction which became the single largest fundraising event in the nation. In 1992 they were the first couple to be recognized as Philanthropists of the Year by the Greater Kansas City Council of Philanthropy. As leaders in the national weekly newspaper industry, the co-publishers traveled to over 100 countries. Shirley loved the travel adventures and meeting people from all over the world. Although Shirley and Stan were a team and accomplished so much together, Shirley made her mark independently. In the 1960’s Shirley founded the College Clinic, the premier college fair in Metro Kansas City. The model she created attracted representatives from more than 150 college admissions representatives from all over the country. That event continues today and is a must for college-bound students to experience. One of Shirley’ proudest achievements was in founding the American Stroke Foundation with her daughter Robbie Small, shortly after her husband Stan’s death from stroke in 1997. The organization has evolved to four locations in the metro and serves thousands of survivors and caregivers who learn firsthand how to cope and live quality lives after stroke. Its goal is to eventually expand the successful model program nationally. Although always busy with her civic and business accomplishments, Shirley’s main priority was always her family. Survivors include her two children, Robbie Small and Stephen Rose and her “other two children,” Stephen Small and Carol Rose; six grandchildren and their spouses, David and Lisa Small, Michael Small, Laura Rose, Josh and Maria Rose, Melissa Rose, and Rebecca and Doug Deveraux, thirteen great-grandchildren, her brother and sister-in-law, Larry and Beverly Mallin, her sister-in-law, Leah de Roulet of Seattle and many nieces and nephews. A memorial service will be held in the chapel at The Temple, Congregation B’nai Jehudah on Monday, April 18, 2022 beginning at 11:00am. There will be a private family graveside service following. Donations should be made to the American Stroke Foundation.

Shirley Rose, 101, of Leawood died in her home on Thursday, April 14, 2022. She was the daughter of Harry and Esther Mallin. The metropolitan Kansas City community is mourning the loss of one of its foremost female civic and business leaders... View Obituary & Service Information

The family of Shirley Rose created this Life Tributes page to make it easy to share your memories.

Shirley Rose, 101, of Leawood died in her home on Thursday, April...