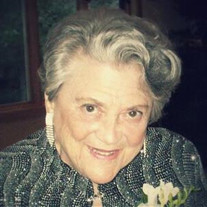 Shirley Seigle, 91, of Overland Park, died Sunday, August 9, 2015 at Village Shalom. Funeral services will be held at 10:00 am Tuesday, August 11, 2015, at The Louis Memorial Chapel, 6830 Troost Ave. Burial Rose Hill Cemetery. Kindly omit flowers; the family suggests contributions to Village Shalom, Kansas City Hospice and Palliative Care or The Temple, Congregation B’nai Jehudah. Shirley was born December 26, 1923 to the late David and Rose Kenis in Rockford, Illinois. She grew up in Chicago where she graduated from Manley High School in 1941. Shirley married the late Sidney Seigle in 1945 and was a lifelong Kansas City area resident. Shirley was an active member of The Temple, Congregation B’nai Jehudah and its Sisterhood, as well as a member of B’nai Brith. She was a religious school teacher at B’nai Jehudah where she taught various grades, including Confirmation. Shirley and Sid were charter members of Meadowbrook Country Club, where Shirley was an avid golfer, even winning a club championship or two. She had several talents including oil painting, knitting, and acting. She performed in several B’nai Brith Kiddie Kapers shows, where she usually provided the comic relief. In 2000, at the age of 76, Shirley became a Bat Mitzvah. Shirley was preceded in death by her parents, husband, and brother, Harold Kenis, of Chicago. She is survived by daughters and sons-in-law: Donna and Bar Kaelter, Leawood, Ks; Barbara and John Waldron, Overland Park, Ks; son and daughter-in-law: Howard and Beth Seigle, Kansas City, Mo; six grandchildren and seven great grandchildren. Shirley is also survived by her beloved sister-in-law, Dorothy Kenis, of Chicago, as well as by several nieces and nephews. Shirley’s family would like to thank her many wonderful caregivers at Village Shalom.

The family of SHIRLEY SEIGLE created this Life Tributes page to make it easy to share your memories.