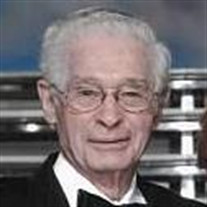 Sidney Carr, 90, of Overland Park, KS, died November 7, 2014, at Kansas City Hospice House. Funeral services will be at noon on Monday, November 10, 2014 at The Louis Memorial Chapel (6830 Troost, Kansas City, Missouri) followed by burial at Rose Hill Cemetery. Kindly omit flowers; the family suggests contributions to The Temple, Congregation B’nai Jehudah, the Jewish Community Center of Greater Kansas City, Kansas City Hospice House or the charity of one’s choice. Sidney was born in Kansas City, Missouri, on April 23, 1924, the son of Louis and Anna (Nudleman) Carr, and was a lifelong area resident. He attended Blenheim Elementary School and Paseo High School. He received a Bachelor’s degree in Business Administration from the University of Missouri, Columbia, MO, and was a member of Phi Sigma Delta fraternity. After college, Sidney married Millicent (“Millie”) Minkin, whom he dated at the University of Missouri, and the couple had two children together, Jimmy and Ellen. After 23 years of marriage, Millie passed away following a battle with cancer. Sometime later, Sidney began courting Rose Jacobs Barash. After much persistence, Rosie finally gave in and went for a cup of coffee with Sidney. The two married in 1972 and Sidney easily became part of her family to which he was exceptionally devoted for more than four decades. Professionally, Sidney was a salesman and entrepreneur in the automotive industry. After graduating college, he went to work for Fairmount Motor Products as a sales representative and stayed with the Mechanic’s Choice division after its spin-off to Avnet. After 45 years, he retired from that organization and in 2001 started his own automotive parts and supplies business, SR Sales, keeping his most prized accounts for decades and was very proud of the relationships he built. He worked with these clients until just a few weeks ago and was slated to receive a commendation for service from the KCMO Police Department. Sidney loved spending time with family and friends. He looked forward to his weekly breakfast gatherings with his friends at the Big Biscuit and, earlier on, at Pumpernik’s. Sidney had a great love for sports, in particular, he was an avid golfer and was many times the club champion for Meadowbrook Country Club, an organization for which he was an early leader. As a result of his great sales success, Sidney and Rosie traveled to many wonderful destinations including trips to Europe and cruises. Perhaps his greatest passion was spending time with his grandchildren and great-grandchildren never missing a recital, sports game or other activity in which they were involved. He loved getting down on the floor with them to construct card houses, play catch in the backyard or talk about anything that piqued their interest. Sidney was preceded in death by his parents, Louis and Anna Carr, first wife, Millie Carr, and sister, Gertie Bursten. He is survived by his beloved wife of 42 years, Rosie of the home; son, Jimmy Carr of Kansas City, MO, daughter Ellen Panus of Bristow, VA, step-daughter and son-in-law, Charlene and Max Muller of Overland Park, KS, step-son and daughter-in-law, Jerry and Karen Barash of Lake Sherwood, CA, step-daughter, Deborah Barash of Overland Park, KS; grandchildren, Tommy and Carrie Carr of Shawnee, KS, Alana Muller and Marc Hammer of Overland Park, KS, Eric and Lydia Muller of Basking Ridge, NJ, Damon and Becky Carr of Lee’s Summit, MO, Shawn and Rachel Muller of Overland Park, KS, Jordan and Julie Barash of Los Angeles, CA, Brandon and Kirsten Barash of Calabasas, CA, Alison Barash of Los Angeles, CA, Melissa and Andy Morgan of Gainesville, VA, Staci and Andy McFadden of Bristow, VA; 15 great-grandchildren: Brayden, Chloe, Simon, Ian, Betsy, Hadley, Braeden, Delaney, Maya, Noah, Connor, Tyler, Emma, Jackson and Harper; brother and sister-in-law, Alfred and Marsha Carr; and countless cousins, nieces, nephews and friends across the country.

The family of Sidney Carr created this Life Tributes page to make it easy to share your memories.