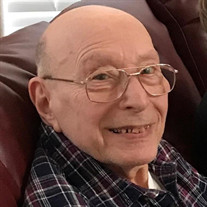 Sidney Hoffman passed away peacefully on December 8, 2020, approximately one month before his 90th birthday. He was surrounded by the love of his family and friends. Sidney and his twin brother, Louis, were born in New York City to Carl and Lena Hoffman. Sidney attended City College of New York at night while working full time during the day to support his family after the passing of his father. He proudly served his country in the United States Army during the Korean War. Sidney married the love of his life, Marilyn Joan Kossover, on June 26, 1960. They had two daughters, Carol Diane and Hope Francine. His career as an accountant/inventory comptroller brought them to Kansas in 1973. Sidney was a life-long member of the Knights of Pythias, serving as Grand Chancellor and Treasurer. He enjoyed the brotherhood of this organization. His membership originated in New York City and continued with the Independence, Missouri chapter. Sidney’s greatest joy in life was his family. His whole world revolved around them. He loved playing baseball and was an avid New York Yankees fan. Later in life, he enjoyed making connections with people through various activities that he frequented such as playing Bingo and card games. Sidney spent his last 3 years at Greenwood Terrace Retirement Community where he made many new friends. He was the epitome of unconditional love, selflessness, respect, and patience. Sidney is survived by his two daughters: Carol Diane Bar, Overland Park, KS and Hope Francine Peña and her wife, Cynthia, Las Vegas, NV along with his two grandchildren: Christine Bar, Las Vegas, NV and Alexandre Bar, Los Angeles, CA. In lieu of flowers, friends and family may honor Sidney’s memory by making a donation to Jewish Family Services (5801 W. 115th St., Suite 103, Overland Park, KS 66211) or to Kansas City Hospice (12000 Wornall Road, Kansas City, MO 64145). Our heartfelt gratitude to JFS for their incredible ongoing support, to Kansas City Hospice for their extraordinary compassionate care during Sidney’s final days, to Louis Memorial Chapel for kindly providing the funeral arrangements, and to Rabbi Mark Levin for graciously officiating the service for our family.

Sidney Hoffman passed away peacefully on December 8, 2020, approximately one month before his 90th birthday. He was surrounded by the love of his family and friends. Sidney and his twin brother, Louis, were born in New York City to Carl and... View Obituary & Service Information

The family of Sidney Hoffman created this Life Tributes page to make it easy to share your memories.