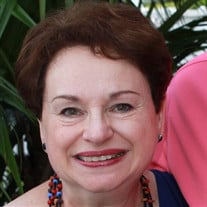 Wife, Mother, and Grandmother Sonia (Kellmer) Eichenwald of Overland Park, KS passed away on January 27, 2015 at Kansas City Hospice House. Graveside services will be held on Thursday, January 29, 2015 at 2:00 p.m. at Rose Hill Cemetery, 6900 Troost in Kansas City, MO. In lieu of flowers, the family suggests contributions to Kansas City Hospice or Village Shalom. Sonia had a love of life and a great devotion to her family. She was born on July 5, 1946 in Cinecittà, Italy to Norbert and Hilda (Winkler) Kellmer. The city was a suburb of Rome that was used as a refugee camp for displaced persons from World War II. She immigrated to the United States in with her parents in 1953. Sonia graduated from Southwest High School in Kansas City in 1964 and received her B.A. in Education from University of Missouri at Columbia in 1967. Sonia briefly worked as a Spanish teacher at Milburn Junior High but spent most of her career working as a foreign language continuing education instructor in German and Italian for The Jewish Community Center, UMKC, Rockhurst University, Avila University and also private lessons. She was a member of The Temple, Congregation B’nai Jehudah, an active member of Greater Kansas City People to People, a life member of Hadassah and a member of the Kansas City Chapter of UNICO. Sonia met her husband Howard in High School and they started dating in college. They were married in 1967 and together they had two daughters, Helene and Rachelle. Sonia loved to read, travel, work crossword puzzles and do counted cross stitch. Her family and many friends benefitted from her love of cooking and her gourmet palate. She and her husband Howard were Civilian Sponsors of International Officers attending the US Army Command and General Staff College at Fort Leavenworth for many years. Sonia was preceded in death by her parents. She is survived by her husband, Howard Eichenwald of the home, her two daughters and their husbands Helene and Jeffrey Slutsky of New Albany, OH, Rachelle and Nat Milgram of Overland Park, her other mother (step-mother) Anna Kellmer of Overland Park, her grandchildren Eli, Caleb, Natalie, Charlotte, Lillian and Samuel, and her bonus grandchildren (step-grandchildren) Amanda, Mitchell and Shane. Sonia’s family would like to thank Dr. Jonathan Jacobs and the doctors and medical staff at The University of Kansas Cancer Center, The Mayo Clinic and Kansas City Hospice and for their care and devotion to Sonia.

The family of SONIA EICHENWALD created this Life Tributes page to make it easy to share your memories.