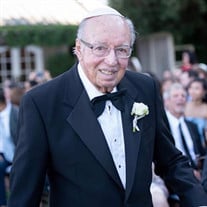 Stanley Paul Bodker, age 90, passed away peacefully, surrounded by his family, on February 17, 2020, in Phoenix, AZ. A beloved father, grandfather, great-grandfather, husband and friend, Stanley was born in Kansas City on January 13, 1930. Growing up as a third-generation Kansas Citian, he played basketball at the Jewish Community Center, and ran track in high school, graduating in 1947. He attended the University of Missouri, earning a BS in Business in 1951. Stanley was a member of the first pledge class of the Alpha Epsilon Pi fraternity chapter at Missouri and helped convince the national fraternity to invest in its first facility at the University. He remained active in AEPI his entire life including helping with the design and financing of a new fraternity house in Columbia. While at Missouri, he met Dorothy Gorelick. They fell in love and were married on November 18, 1951. He and Dorothy moved to San Antonio, TX where Stanley served as a Second Lieutenant in the Air Force. Following his service in the military, he and Dorothy returned to Kansas City in 1953 and raised their son, Stuart, and daughter, Hildy. Stanley went to work for his uncle Sam Bodker in Sam’s clothing store on Minnesota Ave. in Kansas City, KS. In 1956, he joined his parents, David and Anna Bodker, in their fine women’s clothing store on the Square in Independence known as DuVall’s. Dorothy joined the business in 1963 when they opened another store as one of the original tenants in the Ward Parkway Shopping Center. David Bodker passed away in 1964 and Stanley became president of the company, known to his employees as Mr. B. The Ward Parkway store grew to include Young DuVall’s for juniors as well as a beauty salon. In 1969, Stanley expanded to the Country Club Plaza in what was then one of its largest stores. Women needing a dress for a wedding or the Jewel Ball shopped at Swanson’s or Harzfeld’s but always called Dorothy at DuVall’s when it was time to buy. After a forty-seven-year love affair, Dorothy passed away in 1998. Stanley was a lifelong sports fan devoted to the Chiefs, Royals and the NBA Kansas City Kings, at times holding season tickets to all three. He and Dorothy attended the first Super Bowl in 1967. More than any other sport, he loved golf. On his eighty-ninth birthday, he played eighteen holes. And last July, he played one of his final rounds with Stuart and his granddaughter, Jessica. He loved the outdoors. There were many family trips to the Ozarks, including after the weather turned chilly when there was still time for one more boat ride. Stanley was fortunate to find love a second time with Barbara Michaelson and they were married in 2000. They relocated to Phoenix where he continued to enjoy his lifetime passion for golf, organizing weekly games during the summer for a group of guys even though he was the second oldest player on the course. Stanley was preceded in death by his parents, David and Anna Bodker, and by his wife, Dorothy. He is survived by his wife, Barbara, and by his son and daughter-in-law, Stuart and Tensy Bodker, their children, Jessica, Ariel and Michael, and by Ariel’s husband, Geoffrey Dang-Vu. He is also survived by his daughter and son-in-law, Hildy and Joel Goldman, their children, Aaron, Daniel and Michele, and by Daniel’s wife, Stephanie, and their children, Greyson and Asher. He is also survived by his sister, Harriet Epstein, his sister-in-law and brother-in-law Beverly and Joe Rosenthal, his cousin Harvey Bodker and many other cousins, nieces and nephews. He is also survived by Barbara’s son and daughter-in-law, Ed and Mitzi Michaelson and their daughters, Miarabel and Astrid, her son Chris Michaelson and her son Dean Ross. The funeral will be held at noon Friday, February 21, 2020, at The Louis Memorial Chapel, 6830 Troost Avenue, with burial to follow at Mt. Carmel Cemetery. In lieu of flowers, donations may be made to Beth Shalom Synagogue in Overland Park, KS or to Hospice of the Valley in Phoenix, AZ or to a charity of your choice.

The family of Stanley Paul Bodker created this Life Tributes page to make it easy to share your memories.