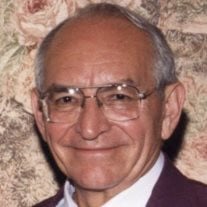 Dr. Stanley Hellerstein, age 87, died March 7, 2014 at his home in Kansas City from complications of congestive heart failure. He will long be remembered for his innumerable contributions to pediatric nephrology and his devotion to family. Stanley was born on October 3, 1926, in Denver, Colorado. He was the youngest of 10 children born to Meyer and Ida Hellerstein. At age 17, he enlisted in the Army during World War II. While training for the Army Corps of Engineers, he met his future wife, Edith Levy, in Washington, DC. In 1948, Stanley earned his BA (Cum Laude) from the University of Colorado at Boulder. There he also renewed his acquaintance with Edith Levy, whom he married in 1949. He chose to study medicine, and in 1952, he graduated from the University of Colorado Medical School in Denver. He completed his pediatric internship and residency in Indianapolis, Indiana. In 1955, he was awarded a fellowship in fluids and electrolytes with Daniel C. Darrow, a renowned expert in the field. This fellowship brought him to the Children's Mercy Hospital and the University of Kansas Medical Center. In 1957, after completing his fellowship, Dr. Hellerstein joined Dr. Joseph Borenstine in private practice. During the next 6 years—an era when doctors still made house calls—he continued his research into fluid balance and the use of oral electrolyte solutions to avoid hospitalizing children with dehydration. Because Dr. Hellerstein missed the stimulation of an academic setting, in 1963 he returned to Children’s Mercy. During a distinguished career that lasted nearly five decades, he participated extensively in the hospital leadership; contributed significantly to pediatric research; and improved the health and lives of tens of thousands of patients. He served as President of the Medical Staff, Director of Medical Education, and Chief of the Nephrology Section. He taught and mentored hundreds of faculty, residents, and medical students. He won numerous teaching awards, including the 2006 Clinical Advances in Pediatrics Clinical Teacher Award. In 2007, he was selected as an Honored Member of the medical staff in recognition of his distinguished contributions. Dr. Hellerstein published more than 120 scientific articles and book chapters and authored a 1982 book, Urinary Tract Infections in Children. He established the hospital’s Nephrology Section. This was one of the first pediatric nephrology departments in the country, and is now among the top ranked in the country. He was recognized with the Kreamer Pediatric Research Excellence Award, and in 1998, he was named as the Ernest L Glassock Chair in Pediatric Research. Because of his significant contributions to the study of urinary problems and kidney function in children, the American Academy of Pediatrics selected him to serve as Chairman of its Nephrology Section. Dr. Hellerstein retired in 2009 after devoting nearly five decades to Children’s Mercy Hospital. His wide-ranging contributions also included founding the clinic for children with sickle-cell disease. In addition, in the late 1970s after treating several infants for a rare kidney disease, Bartter’s Syndrome, his research indicated that the cause of the disease was inadequate chloride in Neo-Mull-Soy formula. This discovery led to the removal of the defective product from the market and a series of legislative and regulatory steps to ensure the safety of infant formulas. Dr. Hellerstein exhibited a rare combination of keen intellect, enthusiasm for learning, humor, and compassion towards others. He was a devoted husband and a beloved father and grandfather. He was preceded in death by Edith, his wife of 61 years, and his nine older siblings. He is survived by his children Joseph Hellerstein of Seattle, Washington; Alice (Michael) Ra’anan of Potomac, MD; and Ann Hellerstein (Samuel Belkin) of Rockville, MD. He is also survived by grandchildren Myra and Toba Hellerstein; Gabriella and Joshua Ra’anan; and Daniel, Mitchell, and Melanie Belkin. He will be deeply missed by all. The funeral will take place at 3 pm on Friday, March 14, at the New Reform Temple at Gregory and Main Streets in Kansas City. In lieu of flowers, please send contributions to the Nephrology Section of Children’s Mercy Hospital in memory of Dr. Stanley Hellerstein.

Dr. Stanley Hellerstein, age 87, died March 7, 2014 at his home in Kansas City from complications of congestive heart failure. He will long be remembered for his innumerable contributions to pediatric nephrology and his devotion to family. Stanley... View Obituary & Service Information

The family of Dr. Stanley Hellerstein created this Life Tributes page to make it easy to share your memories.