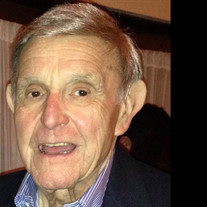 Stanley Alvin Katz, 93, of Leawood, Kansas passed away peacefully on April 21, 2019. Funeral services will be Tuesday, April 23, 2019 at 10:30 am at The Louis Memorial Chapel, 6830 Troost Ave, Kansas City, MO 64131. Burial will follow at Mt. Carmel Cemetery. Donations are suggested to Jewish Family Services’ Pantry, Kansas City Hospice or a charity of one’s choice. Stanley was born February 7, 1926 in Kansas City, MO to Louis and Rose (Gilgus) Katz. He attended Sanford B LADD elementary school and Central High School and graduated with a Bachelor of Science in Business from the University of Missouri-Columbia where he was a member of Sigma Alpha Nu Fraternity. Stanley’s life-long love was the grocery business for over 60 years. He belonged to the Associated Grocers and the Retail Grocers Association. In 1996, he published an article for the Associated Grocers booklet titled, “70 Years of Excellence”. After retirement, Stanley’s passion turned to helping Jewish Family Services in the pantry and as a food buyer for the Salvation Army. He was a member of Romeos and one of the founders of Steppin’ Out, a program for seniors at Beth Shalom Synagogue where he was a devoted member. He was also an active member of the St. Lukes Cardiac Rehab on the Plaza for 32 years. Stanley had a great sense of humor and always wanted to be the reason for people to smile. He followed current events, sports and the stock market. He loved to travel, but his greatest love was of his family. Stanley is preceded in death by his brothers: Harold Katz and Marvin Katz He is survived by his wife of 65 years, Marlene Katz; sister, Marianne and Mason Kessler; children: Jeffrey and Carol Katz, Stephen and Ellen Katz, Valerie and Jeff Gasser; grandchildren: Justin and Jennifer Katz, David and Stacey Katz, Ryan and Dana Katz, Erika Katz, Michael and Leah Gasser, Rebecca Gasser and three great-grandchildren: Noa, Ari and Jacob Katz. The family would like to extend their heart-felt thanks to all of Stanley’s caregivers and Hospice for all their devotion to him.

The family of Stanley Alvin Katz created this Life Tributes page to make it easy to share your memories.