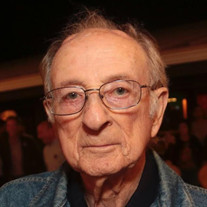 Stanley Bernard Silverman, 88, passed away on June 6. Graveside services and burial will be at 1:00pm Sunday, June 10, 2018 at Mt. Carmel Cemetery, 5529 Ditzler, Raytown, MO 64133. In lieu of flowers, the family requests contributions to the Jewish Community Center Heritage Center. He was a lifelong area resident and a graduate of Central High School. Stan was born in 1929 and after serving in the Korean War, he established a career as a salesman. He is survived by his wife, Rosemary Yarmo Silverman. He also leaves two sisters, Dorothy Kaufman and Miriam Birnbaum, both of Kansas City. He was predeceased by his sister Shirley Springer of Arlington, Virginia. Stan leaves his sons Steven Silverman (Shelly) of Tucson, Arizona, and Michael Silverman (Laura Sherman) of Boston, Massachusetts, and stepchildren James Yarmo, Claire Yarmo and Sherri Katz. He leaves 12 grandchildren and six great-grandchildren. In his final year, he lived in Tucson and led a full and busy life. Stanley never gave up on keeping himself active and engaged. He was a former member of Congregation Beth Shalom and Congregation Beth Torah. Stanley was an award-winning potter, and an active member at a ceramics studio where he created wonderful pieces. Stanley enjoyed pastel drawing at the Heritage Center under Patti Caviar's guidance. He was a member of the ROMEO’s, and had a very long-standing weekly lunch with his closest friends, Leibert Birnbaum and Victor Cascio. Stan will be remembered for his love of family, artistic talent, gentle touch and kind heart.

Stanley Bernard Silverman, 88, passed away on June 6. Graveside services and burial will be at 1:00pm Sunday, June 10, 2018 at Mt. Carmel Cemetery, 5529 Ditzler, Raytown, MO 64133. In lieu of flowers, the family requests contributions to the... View Obituary & Service Information

The family of STANLEY BERNARD SILVERMAN created this Life Tributes page to make it easy to share your memories.