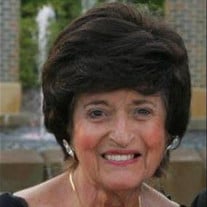 Stella Shemarya Parris August 21, 1929 – April 25, 2018 Stella Shemarya Parris, devoted wife of 60 years, mother, grandmother, sister, aunt and dear friend to everyone she met, died on April 25 following a brief illness -- and 88 years of love. Stella was born in Seattle, Washington to parents Rachel and Jack Shemarya, both immigrants from the Mediterranean island of Rhodes, Greece. Stella and her siblings, Jerry, Sylvia and Al grew up in an environment rich with the unique tastes, smells, and especially songs and dances ingrained in their Sephardic heritage. Her spirited mother spoke seven languages fluently (and once played a trick on Stella by teaching her two children a certain unutterable word in all seven). Stella’s work ethic emerged in her mid-teens when she worked at an outdoor Greek market in Seattle. When she graduated high school at 18, she began a government career with the United States Navy’s Military Sea Transportation Service, cutting officers’ orders at Navy Pier 39. Five years later, she would meet a young pharmacist stationed at Madigan Army Hospital at nearby Fort Lewis who valiantly tried to capture a date on her busy social calendar for three weekends in a row. When she saw a cancellation on the fourth weekend, she called him, and Arnold would become her soulmate, husband and the forever love of her life. They married in 1956, and Stella moved with Arnold to his hometown of Louisville, Kentucky, where they grew their family with a daughter and a son. They were side-by-side partners as they opened the corner drug store from which their life took shape, Mohawk Drugs. Stella and Arnold raised their two children in the back of that store, teaching them how to properly dust shelves, stock merchandise, serve ice cream sundaes at the soda fountain, help deliver prescriptions to customers too sick to stop by, and eventually, ring the big brass cash register. Each night when the family came home, Stella would take out her big ledger and manage the business from her recliner next to Arnold, while their kids did homework and played on the green shag carpet. When she wasn’t doing work for their store, Stella was very actively working for and/or chairing a broad range of local philanthropies, including the Hadassah Medical Organization, Jewish Community Federation, B’nai Brith and many others. She was a working woman who always found time to give back, an iconic message which her children could not miss. Stella’s life was rich with family and philanthropy, cooking and friends – with opportunities to combine them all at every opportunity. But her purest joy came in the time she savored with her beloved husband, with whom she never, ever stopped holding hands. She and Arnold found great joy in time with their kids, grandkids, and extended family and friends – so many of whom were like family. Until their final days, they spent countless hours on bar stools together in their favorite pastime: watching Kentucky and Louisville basketball. Stella is preceded on her journey by her soulmate and husband of 60 years, Arnold. She is survived by her daughter, Roshann Shemarya Parris and husband Jeff Dobbs, her son, Harry Jack Parris, two grandchildren, Justin Parris Cohen and Tessa Diana Cohen who lovingly called her “Vava,” three grandpups, and an awesome group of nieces, nephews, grandnieces and grandnephews to whom Aunt Stella was like a second mother and grandmother. Following a private burial, the family welcomes friends to a memorial service at 6:00 PM at the Parris/Dobbs home on Sunday, April 29 and again on Monday, April 30 at 6:00 PM at Village Shalom. In lieu of flowers, the family would warmly welcome contributions to Village Shalom or the Jewish Family Services Food Pantry.

The family of STELLA SHEMARYA PARRIS created this Life Tributes page to make it easy to share your memories.