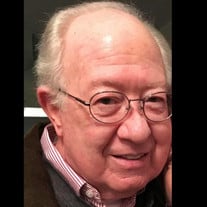 Steven Shulkind, 71, passed away peacefully on August 6th. Funeral services were held on Sunday, August 9th. Burial was at Kehilath Israel Blue Ridge Cemetery in Independence, MO. In lieu of flowers, the family suggests memorial contributions to Jewish National Fund or The Hyman Brand Hebrew Academy. Steven was born in San Diego, California on May 22, 1949. The middle child of loving parents, Lee and Maurice Shulkind, he lived in Southern California until 1964 when the family moved to Shawnee Mission, Kansas for his father to become an executive for Milgram Food Stores. After high school at Shawnee Mission East and stints at Park College, University of Kansas, and University of Missouri, Steven eventually joined his father as a Regional Manager at Milgram Food Stores. Introduced by their enterprising grandmothers, Steve met and married his wife Jan Donovitz in 1974. In 2019, they celebrated 45 wonderful years of marriage. They had two sons, Andrew and James, and Steve loved being a father and participating in their activities. A naturally curious person, Steve spent the largest segment of his career as Vice President/General Manager of E-Z Shelving Systems of Merriam, Kansas which he grew from a heavy-duty shelving operation designed for walk-in coolers to a large-scale manufacturing business for high profile global applications. Before E-Z Shelving, he bought and operated the famed Hazelle Marionette Company. Steve had an endless stream of extracurricular interests and hobbies. He was extremely handy and could fix or build anything. He was certified pilot and an honorary warrior in the tribe of Mic-O-Say. But of his many interests, none compared to his grandchildren. He adored them, and in the words of his oldest granddaughter, “My most vivid memories of my Grandpa are the simple things, the way he would let us play with his cane when we were younger or teach us how to make electricity with a lemon. He would always bring us projects to do together; for example, we built a solar-powered car and toy arcade box. The joy that came from these times can never be taken away, and never will be. My grandpa’s memory lives on in me and in all of us.” Steve is survived by his wife Jan Shulkind of Overland Park, KS, his sister Lauren and Tony Dow of Topanga, CA, children Andrew and Sarah Shulkind of Los Angeles, CA, Jamie Shulkind of Tel Aviv, Israel and his beloved grandchildren, Lucy, Olivia, Sadie, and Oscar.

The family of Steve Shulkind created this Life Tributes page to make it easy to share your memories.