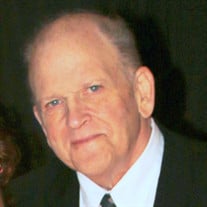 Steven H. Goodman, 74, of Overland Park, Kansas, died peacefully in his sleep on May 8, 2019 after a multi-year battle with cancer. Steve was born on November 24, 1944, to Shale H. Goodman and Ann Frances Goodman in Kansas City, Missouri. Steve and brother, Fredric E. Goodman grew up in a happy home near Gregory and Ward Parkway, where they hosted frequent gatherings with friends and family. During high school, Steve met his first wife of 19 years, Vicki L. Passer. They married in 1967 and had two children. He married his second wife, Edith S. Davis, in 1989. After graduating second in his class from Southwest High School, Steve attended Yale University where he graduated with a degree in Economics in 1967. In 1970, he graduated cum laude with a Juris Doctorate from the University of Michigan School of Law. His lifelong interest in math, economics and law paved the way for his successful career as a Tax and Securities Attorney, first at Morris, Larsen, King, Stamper & Bold, and then at Shughart, Thompson & Kilroy. He was loved by so many and is survived by his wife, Carol E. Frana, his children, Terri L. Steele and Scott H. Goodman, son-in-law James D. Steele and daughter-in-law, Jennifer L. Collins-Goodman, stepsons, Joseph C. Frana and Jeffrey E. Frana, stepdaughter, Jacquelyn C. Carrothers, his grandchildren, Hannah L. Goodman, Shelby H. Goodman, and Zahara L. Howard, five step-grandchildren, 2 step-great-grandchildren, his brother Fredric E. Goodman and sister-in-law Roz Goodman, his uncle Marvin W. Goodman, his nieces and nephews, and his second wife Edith S. Davis. Steve’s interests included politics, history, genealogy, and first and foremost, the game of bridge. He was an avid and successful bridge player and earned the title of Ruby Life Master. He met his wife, Carol, while playing at a bridge tournament. They became interested in one another when Steve called the bridge director to report that Carol had broken one of the bridge rules. The rest was history. They began dating in 2010 and married in 2016. When Steve was younger, he enjoyed golf, swimming and roller coasters. These hobbies faded as he developed severe issues with his spine, resulting in multiple surgeries and years of struggle with his legs. He was a member of, and served on the boards of several organizations, including Native Sons of Kansas City, the Kansas City Chamber of Commerce, and Kansas City Consensus. He frequently donated his time and talent to draft bylaws for various organizations including Bridge Club and Kansas City Consensus. He was honored to serve on the Native Sons and Daughters of Kansas City committee that assisted in the plans to renovate both Union Station and the Liberty Memorial. He was also a lifetime Mensa member. Steve has been a lifelong member of Temple B’nai Jehudah and was active in Temple Youth Group during high school. Steve was a devoted father and regularly shared the finer things in life with his children, including music, live theatre and fine dining. The family has fond memories of swimming at Oakwood Country Club and attending Starlight Theatre during the summers. Among the many gifts he bequeathed to his children was the value of a good education, lifelong learning, and the virtue of hard work. Steve and his children continued to sing folk songs together until the very last days of his life. Memorial services will be held on Sunday May 12, at 1:00 pm at Louis Memorial Chapel at 6830 Troost Ave., Kansas City, Missouri 64131. The burial service will follow at the neighboring Rose Hill Cemetery, 6900 Troost Ave. The family would like to thank Kansas City Hospice and Okelani Home Healthcare for their care and support during Steve’s illness. Mourners may consider donating memorial funds to TheTemple, Congregation B’nai Jehudah, Native Sons & Daughters of Kansas City, Yale University or the University of Michigan.

Steven H. Goodman, 74, of Overland Park, Kansas, died peacefully in his sleep on May 8, 2019 after a multi-year battle with cancer. Steve was born on November 24, 1944, to Shale H. Goodman and Ann Frances Goodman in Kansas City, Missouri. Steve... View Obituary & Service Information

The family of Steven H. Goodman created this Life Tributes page to make it easy to share your memories.