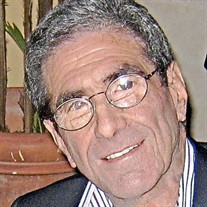 Steven Jay Hammer, 71, of Overland Park, KS, died November 3, 2014, of Large B cell Lymphoma and Adenocarcinoma Lung Cancer. He was surrounded by his loving family, at MD Anderson Cancer Center in Houston, TX. Funeral services will be at 1:30pm on Thursday, November 6th at Louis Memorial Chapel followed by burial at Mount Carmel Cemetery. Kindly omit flowers; the family suggests contributions to Camp Discovery (https://donate.aad.org/stevehammer), Congregation Beth Shalom or Hyman Brand Hebrew Academy. Steven was born in Kansas City, Missouri, on February 13, 1943, the son of William and Jean (Pasternak) Hammer, and was a lifelong area resident. Professionally, Steve was a salesman and entrepreneur in the Garment Industry. With a strong work ethic and dedicated approach, Steve joined his father’s company, Hammer Brothers, in 1961. He took over the business in 1990 and, ran the firm from its offices in the Kansas City River Market with his youngest son, Daniel. Steve loved spending time with family and friends. He and Susan enjoyed traveling and his most beloved pastimes were spending long weekends at his lake home in Camdenton, Missouri, and fixing anything that needed fixing… and even a few things that didn’t! His most special role in life was serving as “Poppi” to his six adoring grandchildren with whom no amount of time was enough. He had a beautiful smile, an infectious laugh, a wonderful sense of humor and was a man who never knew a stranger. He will be deeply missed and loved forever. Steve was preceded in death by his parents, Bill and Jean Hammer, and brother, Robert Hammer. He is survived by his beloved wife of 47 years, Susan of the home; sons and daughters-in-law, Brian and Melissa Hammer of Dallas, TX, Marc Hammer and Alana Muller of Overland Park, KS, and Daniel and Sylvana Hammer of Prairie Village, KS; grandchildren: Chloe, Quincy, Ian, Illiana, Avi and Vitalia; sister-in-law and brother-in-law, Lauren and Neil Davis of St. Louis, MO; and sister, Marilyn Duffy of Overland Park, KS; and countless cousins, nieces, nephews and friends.

Steven Jay Hammer, 71, of Overland Park, KS, died November 3, 2014, of Large B cell Lymphoma and Adenocarcinoma Lung Cancer. He was surrounded by his loving family, at MD Anderson Cancer Center in Houston, TX. Funeral services will be at... View Obituary & Service Information

The family of Steven J. Hammer created this Life Tributes page to make it easy to share your memories.